A Case for the Revolver

Yes, I know I frequently wear T-shirts and baseball caps with firearms logos emblazoned on them. Yes, I know my truck has gun-guy stickers on it. Yes, I know I bring gun magazines to work and pore over them on breaks. Even though I’m asking for it, I still cringe when people ask me advice on guns. Don’t get me wrong; I enjoy educating people so they can make the proper choice for their needs, and I will jump through hoops to make sure that they are properly trained on whatever they own so that they will be safe, responsible, and will pass that creed along. Yet, I flinch (in a flattered way) when somebody asks me that age-old question: “I’m going to get a handgun. What should I get?”

Hollywood, video games, and machismo in general has swayed the general gun buyer’s fancy towards the high-speed, low-drag world of ultra-high capacity magazines with glow-in the dark sights, flashlights, lasers, blah blah blah. So, when I reply to their question with the best answer I know, which is, “get a .22 or .38 revolver”, I am suddenly not taken so seriously. But why not a revolver for a first time handgun owner, and especially why not for a prepper?

Revolvers were the mainstay of police and many military agencies from the 1860s when they were first mass-produced, all the way up until the 1980s…and you know what? They are still relevant pistols today, even though they are somewhat blase when compared with the latest polymer-framed, 17-shot wonderguns that are being popped out of gun factories as fast as they can be moulded. Revolvers have a LOT going for them, all of which the prepper should raise an approving eyebrow at: They are dead reliable. They are extremely accurate. They come in a variety of extremely useful calibers that don’t fly off the shelf as quickly as a box of 9mm. They are easy to clean and maintain. Grips can be changed out to fit an individuals’s hand for better ergonomics and consequently better shooting. Accessories are everywhere, and since revolvers have fallen out of fashion somewhat, good gear can usually be found in a bargain bin at a gun shop for extremely low prices. They come in lots of different frame sizes with a myriad different options (adjustable vs. fixed sights, rounded butt/squared-off butt configurations, barrel lengths from 2″ all the way to 12″, single action vs. double action, blued, stainless steel, nickle plated, etc.) so finding one to fit you and your mission is practically guaranteed. And, possibly best of all, good revolvers can be had cheap: old police department trade-ins can still be had for a song. A quick search found a trade-in S&W Model 64 for $249. That, friends, is the bargain of the century.

One of the main things that a prepper should have first and foremost in mind for a sidearm is reliability. Modern semi-auto handguns usually boast excellent reliability with some types of ammo; however, they can be finicky once in a while if you try feeding them corroded ammo, old, stored ammunition, different bullet profiles, or ammunition lengths (.22 LR vs. 22 short, for example.) Not the revolver! A revolver will readily gobble up proper-caliber ammunition, no matter if it’s the most gaping hollowpoint or low-powered target loads. And if the round doesn’t go off? No problem! No slap-rack-bang drills or having to clear a jammed gun; another pull of the trigger will bring a fresh round into play, minimal training required. As a bonus, the smooth, consistent trigger pulls are wonderful to use and to train with. Try finding a Glock with a nice trigger pull. 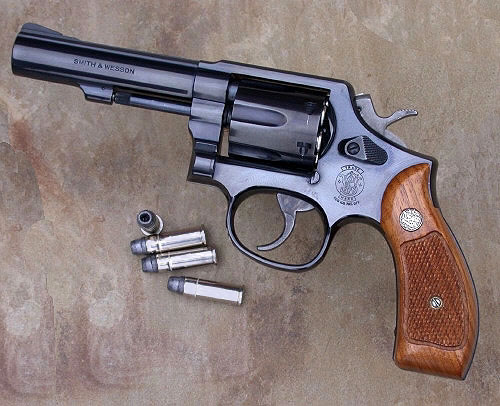 For we preppers, one really has to look no further than the Smith & Wesson Model 10 or 64 (blued/stainless) for quite possibly the best sidearm ever. This model was first brought out in 1903 (!) and has remained in continuous production since, with very few changes. If you have seen “The Road”, this is the gun that Viggo Mortensen carried with him (with just two bullets?! Stock up, folks!!!). This is simply one of those guns that you cannot kill. If you get one made since the 1960s or so, you can throw any .38 Special load at it, from a wadcutter target load to shotshells to the snarliest +P loadings, and it will deliver the bullet with precision and come back for more. Jacketed bullets? Lead bullets? No problem! The fixed sights are simple, with nothing to break or come out of adjustment. I love these damn guns, and for good reason. They’re simply perfectly adapted for what we need them to do. 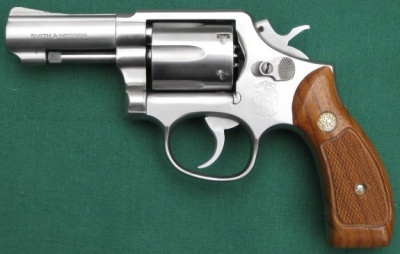 The same gun in .357 Magnum is the S&W Model 13 or 65. These guns are truly awesome, and I carried a 3″ Model 65 for many, many years. It will handle the mighty .357 Magnum caliber, which is renowned for its hunting and manstopping capability. It will also shoot the .38 Special caliber as well. A prepper with one of these needs to look no further for the perfect sidearm.  A single-action or double-action revolver in .45 Colt is also a winning ticket, but not just because it delivers a big-ass chunk of lead downrange. The .45 Colt was developed in the 1870’s originally as a black-powder caliber, and if the chips are truly down and you have to make your own black gunpowder, it will still do its thing with aplomb. Yes, the .38 and .357 Magnum can be loaded with black powder, but they simply don’t have the case capacity to move their projectiles at a meaningful enough velocity to make them very effective. The .45 Colt does, and with black powder still is powerful enough to hunt large game with. Pair your revolver with a matching lever action carbine in the same caliber, and you’ll be as stylin’ as any prepper can be.

You’ll notice I have a propensity towards Smith & Wesson double-action revolvers – I just consider them the best. However, Ruger, Colt and the more recent upstart Taurus all make fine offerings. The reason I lean towards double-action is really simplicity. Point the gun, pull the trigger. In a bad situation, simplicity will save your life. Also, single-action revolvers are much slower to load – the loading gate must be opened, the fired cases punched out one at a time, then re-loaded one at a time. I can reload a double-action revolver with a swing-out cylinder in less than three seconds with a speedloader, and even if I have to load the cartridges singly by hand, it’s still waaaaay faster than the single-action.

Folks, make no mistake: when TSHTF, semi-auto guns WILL go down if not properly maintained, and they are not effective fighting tools if you are not properly trained with them. I’d much rather have someone with me who had six .38s that I know will go off and hit their intended targets than seventeen 9mms that will be launched downrange as fast as the trigger can be pulled with varying results. The revolver isn’t cool anymore according to the movies, but in my hands when everything is wrong, it certainly would be right.

What do you guys think? Let’s hear it!