Bored and looking for the best survival board games to play with family and friends? Maybe you’ve watched almost every post-apocalyptic movie out there and want something else to do that is both fun and in the survival/prepper genre.

The board game market is quite different than when I was a kid. There’s an entire sub-market now for niche board games, specialty games with unique twists and themes. It’s relatively easy now for people to come up with a game idea, go onto Kickstarter’s table top games section, and try to get their idea funded. Doom & Bloom did this with their Survivor game (no longer available). Board Game Geek is a site devoted to fans of these unique games. There’s truly something for everyone.

These niche games, as you can imagine, typically come at a premium price. They’re limited run games so they can’t reach the same economy of scale that Monopoly might get. Limited run does not mean low quality, however. My experience has shown just the opposite, that these games are actually higher quality than mass produced games. Regardless, I’ve tried to provide a mix of games in the list below. Some you’ve inevitably heard of before, others – probably not.

Best Survival Board Games for a Quarantine

Zombies! They provide great entertainment and escapism (perfect for a quarantine). Last Night on Earth is a fast-paced game where hero players must try to survive by working together to make it through the night. The zombie players control the waves of undead that are growing across the entire town. This game is so popular it comes with expansion sets for people who just can’t quite get enough braaaaaaaiiiiiiiiiinnnnnnnssssss! 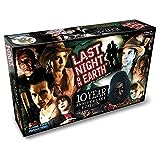 Maximum Apocalypse is a cooperative game where 1-6 players work together to survive in a post-collapse civilization. The game map is randomly generated, so it’s unique each time. You start by picking a survivor class and then you plan your strategy while working together to rely on each character’s skills. Scout the map, defeat vicious beasts, and avoid deadly traps. If you can find enough gas and get back to your van – you can escape and win. If you’re overwhelmed by the monsters or die of starvation – you lose.

Twilight Struggle is a little-known, but great game of Cold War survival. The game is limited to two players, but it’s an exceptionally unique game. It simulates the 45-year Cold War between the United States and the Soviet Union. It recreates that war, so it offers a bit of a history lesson at the same time. Great for plenty of time to kill, the game can run 3-4 hours to complete, so you can start it, then go back to it later. Players move their units and exert their influence. Great reviews accompany this game. Great for ages 13 and up. 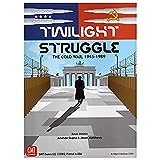 Another zombie board game. Zpocalypse has a cult-like following. Set in a post-apocalyptic wasteland, 2-4 players start in a fallout shelter and have to move through tunnels and sewers through a transforming board. Scavenge supplies, upgrade your gun, and fight off the zombies. It’s probably the most expensive game in this list, but with a playing time of 100 minutes, a few rounds of the game could make it worth it as you try to burn through the hours of a quarantine day after day after day. It’s not the Apocalypse, it’s the Zpocalypse. 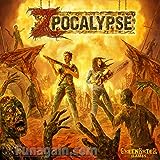 The only way to survive the war is to win the war. Hasbro’s 60th Anniversary Edition of this classic game has over 2,000 reviews – and for good reason. A mix of luck and strategy, you seek global domination against your opponents. The best part of this game – for a quarantine – is that it can go on… and on… and on… but what else do you have to do? Nothing. Remember – take Australia!

We’re halfway through our list of the ten best survival board games. Based on the TV series, of course. The Walking Dead board game is a reasonably-priced game where players take on the role of characters from the show. You need to go on supply runs and return to camp before it’s too late. If you die, you come back as a zombie to hunt down the remaining players. The rules are easy to learn. For 1-4 players aged 15+.

The Walking Dead TV Board Game
$49.19
Buy on Amazon

Nothing says “survival game” like The Worst-Case Scenario Survival Game. Loved by many, this game challenges players’ survival instincts while simultaneously teaching survival skills in various, somewhat wild scenarios. For example, can you fight off a shark or land an airplane? If you provide the correct answer you move on to an even worse situation. The game has 600 questions for ages 8 and up.

The world has come to a bitter end. If you want to survive, you need to think strategically, be cunning, and use your negotiation skills. Conflicted: Survive the Apocalypse is a player versus player game for 2-6 players aged 13 and up. Each player is a leader who needs to find supplies and followers. You build a camp that you have to defend from others. Do you have what it takes to come out on top?

Another classic war survival game. This game has been around for a long while and for good reason. It is a great way to pass a few hours (literally) while simultaneously giving those kids a little World War II history lesson… sort of. Recommended age group is 13-15 years, but having played this game, it’s more the minimum age as this board game is great for college students right on up through adulthood. Axis and Allies Pacific 1940 by Wizards of the Coast is but one of several different variations of the game.

Bonus – It can actually be combined with Axis and Allies Europe 1940 for even greater game play. Bigger Bonus – They even make Axis & Allies & Zombies!

Maybe I chose Pandemic as the best survival game in this list because I’m writing this post during the COVID-19 coronavirus quarantine. It seems timely and fitting. You’re members of an elite disease-fighting team working together to contain outbreaks. There are researchers, scientists, dispatchers, quarantine specialists, and medics. You need to simultaneously treat infections while gathering all of the necessary resources to find possible cures. For 2-4 players with a game time of 45 minutes.

Pandemic Board Game (Base Game) | Family Board Game | Board Game for Adults and Family | Cooperative Board Game | Ages 8+ | 2 to 4 players | Average Playtime 45 minutes | Made by Z-Man Games
$35.99
Buy on Amazon

In August of 2020 I had the opportunity to review a new-to-me survival board game called The G.O.O.D Game (Get Out Of Dodge). You can read my review by following that link. It is essentially a “bug out” game where the first person to reach the bug out cabin wins. Check it out!

For as popular as survivalism and personal preparedness is, I actually expected to find more games within this genre. While there are others, the top ten list I have here is – what appears to me – the cream of the crop. I’m sure there are others, however. Did I miss one on your list of the best?

How to Purify Water with Bleach in 5 Steps

Arkansas Preppers – What You Need to Know