Among a recent treasure trove of used reloading gear presented by a friend, I discovered an old but familiar item, a Lee Precision Classic Lee Loader. These small kits have been sold for more than 60 years. Simple, affordable, and portable, they can restore a supply of fired brass cases to fully functional cartridges pretty much anywhere, from a tailgate to a remote cabin. My reloading career began with a Lee kit years ago in a less exotic location – my bedroom, at the ripe old age of fourteen.

And, instead of metallic cartridges, I was reloading shotgun shells. The reloading bench was the top of my dresser, and the entire “press” was stored in a drawer. The process was a lot more labor-intensive than my current progressive-press loading system, but the final product – a 2 ¾” 12 Gauge target load – was every bit as good if not better.

If you’re just getting started with reloading I’d also suggest following this link to read more on the subject.

Sadly, the shotgun version is no longer cataloged. However, Lee still lists their kits for a number of rifle and handgun calibers. The price, at under $50, is right.

Shop for your caliber Classic Lee Loader at Optics Planet.

Since the gifted .30/06 Classic Lee was in pristine condition, I decided to give it a try. I had a good collection of components, but one possible stumbling block was powder suitable for the kit’s scoop measure.

Of the many powders with different burn-rates and densities, only some will be safe for a given caliber and its projectiles. Beyond that, specified charges must be used to maintain safe pressure-parameters. My longstanding ’06 hunting load, fueled by IMR 4350, is charged by weight (in grains) from a carefully adjusted powder measure. But the kit uses a fixed-volume powder scoop.

Lee provides a chart that shows suitable powders for popular bullet weights, but IMR 4350 wasn’t listed. Luckily, of the three propellants shown for 150-grain bullets, my on-hand cannister of IMR 4064 did appear. From there I was in business through a stash of CCI 200 Large Rifle Primers, Hornady 150-grain Interlock Spire-points and a collection of cartridge cases.

The starting point was a batch of clean cases with identical headstamps. A box of once fired ’06 brass had that covered but posed a concern, having been fired in several rifles. The Lee kit includes clear and easy to follow directions, starting with a diagram of the steps. Not mentioned there (but covered later on) is the essential resizing process.

If you have a supply of clean Boxer-primed (standard U.S.) cases, fired in your gun, the Lee resizing die should work fine. Brass is a perfect material for a metallic cartridge because of its elasticity. The same pressure that expels the bullet will expand the case to seal it against the chamber’s walls. As the bullet exits and pressure subsides, the brass case will contract for easy extraction – from that particular chamber.

However, because of tolerances, it could be too large to fit others. For this reason, most of us squeeze our fired cases back to factory specs via full-length resizing dies and high-leverage presses. The process requires lubricant and considerable force – a challenge for a simple hand tool. Resizing only the forward section (bullet-gripping neck) requires a lot less – the reason why Lee kits are designed to “neck-size” bottle-necked cartridges.

Case lube wasn’t mentioned in the directions but, playing it safe, I did apply a swipe of Imperial Sizing Die Wax to the first ’06 case. Resizing was much easier than expected so I skipped it for the rest.

I planned on photographing each of the seven steps but, as it turned out, Lee already had the process covered via clear photos.

Step 1: Knock out the old primers.

Step 2: Drive the case into the tool flush with the end.

Step 3: Insert a primer into the locating ring

Step 4: Use the decapping chamber and tap the rod to free the case.

Step 6: Insert the bullet through the top.

Step 7: Insert the bullet sealer and tap into place.

Step #5 Note: Before charging the first primed case, I filled the kit’s 3.4 cc dipper with a leveled charge of IMR 4064. My powder scale indicated a weight of 46.5 grains – more than the 45.6 grs. listed for the dipper, but still below the data shown in my Hornady manual. Several more practice scoops produced similar weights, plus or minus a few tenths of a grain – deemed close enough.

Step # 7 Note: Prior to seating the first bullet, I unscrewed the die’s locknut and backed out the stop collar. Then, through trial and error (using vernier calipers), I gradually increased the seating depth to coincide with my existing handload. The nut was locked when “cartridge overall length” was 3.230”, identical to the C.O.L. shown in my now-dated Hornady Handbook (third Edition).

We Have A Cartridge!

The first .30/06 Lee handload looked every bit as good as my press-produced cartridges. It also chambered without difficulty in a Remington Model 700 (carefully loaded on my outdoor range). Same for the next two, at which point I halted production to set up a shooting test.

Figuring the Lee handload would shoot close to my established hunting load, I placed a target at 100 yards, set up the chronograph, and fired one shot off sandbag rest. It hit almost dead-center and extracted without issues. As expected though, velocity was only 2559 fps (15 feet off the muzzle), a tad faster than Lee’s 2532 fps claim, probably due to my slightly heavier charge and/or the M-700’s 24” barrel.

Things were looking promising but the next two shots clocked 2469 and 2415 fps – one heck of a velocity spread! The 144-fps extreme no doubt explained a vertically strung 2 ½” group – not the norm for this rifle.

The problem coming to mind was my dipper technique, called good after just a few practice dips. To find out, I compared a few more dipper charges to the scale. Results were inconsistent so I used the dipper and scale to assemble three more cartridges with weighed 46.5-grain charges.

Big improvement; 2478, 2478, and 2481 fps (an extreme spread of only 9 fps)! The second series coincided with the two slower shots from the first, to form a 5-shot a 1 ¾” group – not stellar, but still useful. Velocity was only around 100 fps faster than a .30/30, however the load is subject to improvement through more throttle (see below).

Bottle-necked cartridge cases tend to stretch lengthwise during multiple firing cycles and, although less of an issue with neck-sized brass, maximum case length should never be exceeded! The neck needs some clearance to release the bullet. If pinched against the chamber, dangerous pressures could develop.

Before attempting to reload the above Remington .30/06 cases, I measured their lengths with a dial caliper. Having only been fired once, they hovered around 2.488”, safely below 2.494” max. If not, their necks would’ve required a trim and, among the various devices sold for this purpose, the simplest is Lee’s caliber-specific case-pilot & cutter system.

Case Chamfer Tool: Chamfers and deburrs the outside and inside of case necks (to ease bullet seating). Can also be used to deburr the crimped primer pockets common to military brass. 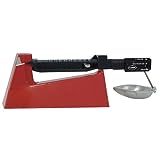 Word-of-mouth load recipes are risky and Internet sources are often no better. Lee’s chart is the much safer starting point, but a currently dated reloading manual is still worth every cent. One example of several: The Hornady Handbook (now in its 11th edition), is available as printed and electronic versions.

Like others, it contains useful reloading information and covers a wide range of loads – with further value for cross reference purposes.

A caliper (dial or digital) will provide the measurements needed to control crucial cartridge dimensions. A useful last step: Label each box of handloads with all of the pertinent data to include the components, overall length, and the assembly date.

Given these uncertain times, ongoing scarcity of ammunition and its escalating cost, a stash of brass and an inexpensive reloading system could make sense. The Classic Lee Loader is presently available in fifteen calibers, including six popular handgun picks.

For projects like a 500-round batch of .223s, I’ll stick with the press-equipped reloading bench, thanks. But the equipment and components constitute a large pile of “stuff”, not very conducive to mobility. For lower volume production typical of cartridges like the ‘06 (and many others), a Classic Lee Loader could well be the perfect on-the-move alternative.

Granted, components aren’t cheap, but they can be procured piecemeal through local or shipped sources. These items, and the equipment, also appear at gun shows and even garage sales, for substantial savings. The most expensive component is typically the cartridge case. But, thanks to Lee’s more gentle sizing process, they should be good for at least several firings – if not a heck of a lot more!

3 Ways to Buy Antibiotics Without a Prescription

7 Tips for Camping in Windy Conditions

Amazing coincidence! I do have two presses for numerous calibers. But I thought it would be a good thing to have an emergency set-up, just in case.

Being of Canadian extraction (but now residing in unoccupied Florida), my thoughts turned to my .303. I figured it a wise thing to have an available “just in case option” should I be away from home when the bell rings.

My set appears to work exactly as you describe, even as to the point of imprecise
and very light charges. Also, like you, my ‘go to” powder (A4064 in my case) wasn’t listed on the accompanying charge table. Luckly taking several practice dips with the given yellow scoop found a useful load. I made it a point to hand scribble said charge to the charge table.

Whilst my regular press set happily works just fine, it is good to know that a Plan “B” is available to me, just in case.