Home Food and WaterFood Storage Desiccant or Oxygen Absorber – Which Should You Use?
Food Storage

Desiccant or Oxygen Absorber – Which Should You Use?

It’s not uncommon for new preppers to feel confused over long-term food storage. What should you stock? How much of it? And how do you store it?

One of the biggest mistakes I’ve seen (and one I made early on) is not knowing whether to use a desiccant or oxygen absorber in stored food.

Oxygen absorbers. The bacteria that cause food to go bad needs oxygen to survive. Food that is exposed to oxygen will have faster rates of going rancid. So, if you want to lengthen the shelf life of food you need to remove the oxygen. One of the ways to do this is to add oxygen absorbers, sometimes known as oxygen scavengers.

Desiccants. Moisture in the air is another factor that can cause some foods to spoil, metals to turn rusty, and medications to lose effectiveness. Bacteria and molds need moisture to survive. By removing the water from the air you starve these organisms of an essential nutrient and thereby killing them or preventing them from reproducing or growing.

An oxygen absorber is any substance that reacts with oxygen to reduce or remove oxygen from sealed packages. It “absorbs” the oxygen.

The various effects of oxygen on preserved foods and beverages includes rancidity of unsaturated fats (i.e. ‘off-flavors’ and toxic end-products), darkening of fresh meat pigments by promoting the growth of aerobic bacteria and fungi, stale odor of soft bakery foods and phenolic browning of fruit/vegetables.

Absorbers were first used in the early 20th century. Today’s absorbers are made of an iron powder mix. When it’s exposed to oxygen, the oxygen is “used” in a chemical reaction that turns the iron powder into iron oxide. This is a similar reaction to what happens with disposable hand warmers.

In fact, if you pulled an oxygen absorber out while it was working it would feel warm to the touch. While technically feasible, abandon the idea of using hand warmers as oxygen absorbers in a pinch (as some people suggest). The chemical reaction may be similar but their intended use is not. Hand warmers are not rated for use with food. 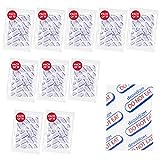 When enough absorbers are placed in a sealed food container, they will drain the O2 and leave only nitrogen in the space.

Oxygen absorbers are single-use only. Once an oxygen absorber has absorbed its full capacity of oxygen and the packaged food has been opened, the absorbers should be thrown away.

Oxygen absorbers can be used in any area where the presence of oxygen will have a detrimental effect on the product.

Prevent Corrosion. Most corrosion occurs as the chemicals in the metals react with oxygen. This process is known as oxidation or oxidization. If the oxygen is removed from the environment, the chemical reaction cannot take place and corrosion does not occur. Oxygen absorbers are often used in oil and gas production installations and sea water systems to increase their lifespan.

Pharmaceutical Products. Many pharmaceutical products lose their efficacy due to oxidation. Thus, by removing the oxygen with an oxygen absorber, the quality and efficacy of the drug is retained.

Food Products. Oxygen can have many effects on food. This spoilage process can be slowed by removing oxygen from the packaging. Oxidization also leads to a change in flavor, aroma, and texture. Oxygen absorbers in food packaging also ensure food is safe to eat. This is particularly important in countries where the cold chain may, or cannot, be adhered to.

Oxygen absorbers are typically sold in the following sizes (links carry you to Amazon listing).

You may find that in some cases it makes more sense to use a few smaller absorbers rather than one larger absorber. This is due to placement. A food storage container requiring 1000cc may be better off with five 200cc absorbers dispersed throughout the container.

The following table should serve as a rough guide for how many oxygen absorbers to use. When in doubt, be liberal. You cannot use too many absorbers.

What Foods Can be Stored with Oxygen Absorbers?

What Foods Should Not be Stored with Oxygen Absorbers?

Ask a manufacturer of O2 absorbers and they’ll tell you to use them with just about everything. However, there are foods that you should avoid using absorbers with and other foods that may not yield much benefit from them.

Some foods do not need oxygen absorbers unless stored for extended periods of time. Whole grains that nave not been hulled (wheat, corn, and rye as examples) are not particularly sensitive to oxygen, so if they are to be used within 5 years, using absorbers is likely a waste of money. This also applies to beans and peas. The exception here is if you are trying to prevent weevils. Depriving weevils of oxygen will kill them.

Processed and high-fat grains and legumes (oats, barley, nuts, split peas, etc.) will benefit from absorbers if they’re being stored for more than one year.

Foods with high oil content should not be stored with oxygen absorbers. This includes most nuts, which generally don’t have a shelf life beyond a few years anyway.

A desiccant is a moisture absorber. It controls the amount of moisture in a product. They are made of different materials.

The most common desiccant is silica gel. It is found in small sachets when you buy anything from a pair of trainers to a bottle of pills. It is also the substance used in disposable diapers as it is very absorbent and non-toxic.

Silica gel is made from silica dioxide which is a compound found in sand. It has small particles that attract moisture through the process of adsorption. Water particles attach themselves to the silica surface but does not alter the beads. This makes it ideal for absorbing moisture.

Silica gel sachets can be reused. Heating them to a temperature higher than 300’F will allow them to release their moisture. You can then place them back in the container and they will get back to absorbing moisture. Silica gel can absorb up to 40% of its weight in water.

This chart will give you an idea of how many silica packs to use when preparing materials for long-term storage.

Activated charcoal is enclosed in small porous sachets much like the silica gel sachets. As well as being a good moisture absorber these are used mostly to absorb odor in plastic containers and the smell of dye in new clothing. The sachet’s that hold the activated charcoal are usually made of a paper, cotton, and polyester composite blend.

Calcium sulfate is an inorganic desiccant that is used mainly in laboratories as it is chemically stable, non-disintegrating, nontoxic and non-corrosive. It also does not release the water it has absorbed at high temperatures. The small blue grains will slowly turn pink as they absorb moisture.

Calcium chloride is a white substance that absorbs water vapor extremely well. Its absorption increases exponentially as the humidity rises. It can absorb several times its own weight in water causing it to dissolve into a liquid.

Montmorillonite clay, also known as Bentonite Clay, occurs naturally and is prepared for use as a desiccant by a process of careful drying. It absorbs water well but is quick to release it back into the atmosphere at higher temperatures. It is a fine brown powder enclosed in a porous sachet. The powder is also used in the winemaking process.

Molecular sieves are crystalline metal aluminosillicates. They have a three-dimensional interconnecting structure. By heating them, water is removed, and this produces uniform cavities. The sieve will then selectively adsorb molecules of a specific size. Molecular sieves that are used as desiccants are designed to adsorb water molecules. They thus have an excellent rate of adsorption.

Which Desiccant Material is Best?

A molecular sieve is the most absorbent of the desiccants. It can remove all the H2O molecules from a silica gel bead. A molecular sieve is a synthetic, porous crystalline aluminosilicate which has been designed to attract molecules of a particular size. This way it can be engineered to absorb water molecules while not absorbing other molecules that may be present. It is commonly used in pharmaceutical packaging in the UK.

Montmorillonite clay is the cheapest desiccant but at temperatures above 120’F it may begin to release moisture instead of absorbing it.

Silica gel is the only desiccant that has been approved by the FDA for use with food and pharmaceutical products and is best for domestic use. It performs best at room temperature but will continue to work even at high temperatures. It is non-toxic, easy to use and reusable

This chart gives an easy-to-follow visual interpretation of the effectiveness of various desiccants.

What are Desiccants Used For?

Desiccants are used to reduce the humidity in packaging by absorbing moisture. The desiccant has a higher absorbency than the goods packaged, such as medication tablets, and thus they help to keep the tablets dry and safe. They can be used in packaging of food products, pharmaceuticals, clothing, electronic equipment, optics, and just about any other product that may be adversely affected by dampness.

Desiccants also have uses around the house.

Can Oxygen Absorbers be Used with Desiccants?

Storing Sugar Long-Term – How Preppers Do It