With spring in the air and turkey season around the corner, I was struck by the urge to build a simple set of shooting sticks. The idea involved a hassle-free system that might double-duty as a trekker pole for the pre-dawn woods while lugging gear, a couple turkey decoys, and a shotgun.

With luck, a return trip could include a real turkey – effectively tying up both hands. Which sparked the idea of low-budget sticks that could be left behind or stashed for future hunts, and if they only cost a few bucks but did the job, a few more could follow.

My no-longer cataloged Cabelas telescoping sticks do well once the legs are adjusted, but the twist-locks are a bit fiddly, and it’s not stiff enough to serve as a hiking pole. Cost is also enough to raise concerns about leaving them somewhere in the boonies.

Why Use Shooting Sticks?

I don’t use shooting sticks all that often, mostly because my state is heavily forested. Shots typically occur at close ranges and a tree is often available for an improvised support. There are still uses for them, however.

Shooting sticks can be handy in a ground blind, or during mobile coyote and turkey hunts. Our terrain differs from wide-open western spaces, where shots at much greater ranges are common – ones that require steady holds. Short of a shooting bench, a rifle-mounted bipod is the ticket to maximum stability.

However, a taller set of lightweight sticks is often the more practical compromise – something African outfitters figured out years ago via a simple set of lashed poles. They’re fool-proof and fast!

Some people connect three sticks to form a tripod, but a two-legged set is much steadier than an unsupported offhand position – and it can be instantly deployed on a grade or uneven ground. Height adjustments are made by simply changing the angles of the legs.

No worries about stuck friction locks or slippage, unlike my fancier commercial sticks that require some time to get “just right.” Some commercial designs can be shortened for carry-purposes via internally bungeed leg sections (similar to tent poles), however, the sections may separate when the tips stick in soft ground or snow. Also, multi-piece legs of either design can be defeated by ice.

Conclusion: At times, simple can be good.

3 Steps to Making Your Own Shooting Sticks

I live by Keep It Simple, Stupid (KISS) whenever possible. Initially, I considered a jury-rigged pair of pointed cedar garden stakes, connected by a 1/4×20 carriage bolt and wingnut. If it worked, I planned on building a few more. But first, I surfed the Internet for “homemade shooting sticks.”

Along the way, I stumbled on to the system shown here. Actually, I found a couple variations of the design. Credit for this one goes to NB Wildman, whose YouTube video clearly explains the process.

As presented, the project only requires a couple 5-foot-long plastic-coated metal stakes, four elastic castrating bands (say what?), and a set of needle-nose pliers. Sounds simple enough – assuming the bands can be found.

As it turned out, a trip to a well-stocked local farm supply/hardware store produced the few necessary items. The stakes looked identical to those in the video, but were 6-footers, advertised as Green Thumb Sturdy Plant Stakes. I wasn’t as optimistic about castration bands, but the nice sales lady produced a 100-count bag without blinking an eye.

Feeling creative, I searched another isle of flexible tubing, to serve as cushions for the cradle-sections of the stakes. Goodyear’s black ½-inch inside-diameter hose tuned out to be a perfect slip-on fit so I bought a couple feet, enough to build a few sticks beyond the prototype.

Plastic-coated steel stakes, $4.99 each (need 2): Those I’ve encountered seem like solid rods because of their plastic-clad ends. I wound up shortening mine two feet, but later ran into other lengths to include four-footers. Some are advertised differently (possibly, as electric fence stakes). 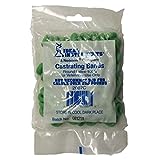 Castrating bands, 100-count bag, $3.29 (need 4): Not recommended for calves above 250 pounds! Fortunately, these hi-tensile Latex bands will only serve as our hinges (even at that, you’ll be in for a tussle).

Before proceeding, I stacked a pair of milk crates on the back lawn, dragged out my commercial telescoping sticks, and retrieved a deer rifle to replicate an oft-used makeshift ground blind setup on my backyard shooting range. Its legs extend enough to permit standing shots, but I was after a shorter set.

By tinkering with the adjustments, I discovered 50-inches would handle everything from high kneeling to seated ground-level positions. Length isn’t super-critical and, no doubt, others will opt for a taller set.

I lightly clamped each stake in a padded vice (to avoid crushing its interior tube) and trimmed off its excess length with a hacksaw.

Next came the castration bands. The first one is slipped over the “leg” of your choice – relatively easy using finger pressure. However, the next three bands need to slip over both legs – not so easy, but doable. I stretched ‘em with needle-nose pliers. All four should all wind up somewhere around 2-inches below the stake-tips.

Now for positioning of the lower band; your hinge. It needs to be stretched over the upper three bands and the tip of the stake. At that point, it’ll snap clear to encircle the three dual-leg bands, binding everything together. While attempting to stretch it, I was thankful not to be a calf- we’re talking tight! A shorter stretch-distance helps (the reason I didn’t start at 4-inches), but it still requires plenty of elbow grease. I used the needle-nose pliers, held my mouth just right, and was able to set it in place. The result was a surprisingly secure but flexible connection!

The last step involved working the bands down the stakes to produce a 4-inch cradle (approximate). This took lots of effort, so I eased the process with some silicone. And, within just a few minutes, I owned a serviceable set of shooting sticks.

One concern was the plastic-coated leg surfaces, peppered with small nubs that could mar a stock. Also, hard contact between a rifle and hard surface can result in shifting impacts – the reason for rubber tubing.

I snipped off two 4” sections of tubing and slid them over the poles to produce snug fitting but removable cushions. The tips wound up above the poles for additional protection from dings but, because my stakes were open to the weather, I had concerns about water and rust.

The lo-tech solution was a pair of inexpensive foam earplugs, pressed into the open ends, and topped with small dabs of grease.

Since the integral plastic pointed tips were still present, it was time for a trial run. The system worked well enough on the lawn, but after switching to a hard floor, the legs slipped and spread apart – a potential problem during winter coyote hunts involving frozen surfaces.

Time for a closer look at an amputated leg piece. After rummaging through my archery gear, I discovered an old aluminum #2312 arrow would just squeak into the open end. That lead to the possibility of just an insert; the part an arrow-tip screws into. A probe indicated only the bottom inch of the stake’s pointed end was solid, so I headed to our local archery shop with the short stake sample.

The inserts are machined from aluminum, in various diameters. They’re held in place by a coating of archery heat-glue, which requires a small amount of clearance. After finding a few that fit, I added a stick of glue and some field-points.

Glue, $5.75 (Bohning Ferr-L-Tight Hot-Melt Adhesive): Packaged as a stick, there’s enough for dozens of sticks – or arrows! Because it’s not brittle, it won’t fracture during impacts.

Arrow Points, $0.75 each (need 2): I bought some 125-grain steel field-target points of the same approximate diameter as the inserts (but later went with target points on hand).

Back home, I shortened the pointed stake ends by an inch and de-burred them with a cartridge case chamfering tool (a countersink or knife would work).

To install an insert, I carefully clamped its flanged-end in a vice, heated it with a propane torch, and smeared on a light coating of glue. Immediately afterward, I pressed a hollow leg over the insert – an easy process. From there, it was just a matter of screwing in the tips.

The threads are a standard 8×32 pattern and, to prevent them from loosening, I used plastic crush washers sold for this purpose. Or you could create your own tip system from common hardware. I wished the shop had rubber Saunders Bludgeon small-game heads, which looked like perfect all-around tips. No luck there, but Cabelas lists them at $13 for four. Lots of other items online, too. 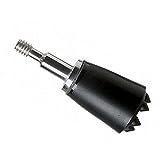 The sticks will want to spread when carried so, to solve this issue, along with some rattling, I slid a short section of ¾” clear plastic tubing over both legs. This stiffened them to the point where I had a useful walking stick. To prevent its loss, I considered tethering the tubing to the sticks, but in the end, wound up using a short elastic band and a paper clip.

A section of the clip was trimmed to create a small hook, the elastic was threaded through the remaining loop, and the “latch” was secured between two additional C-bands on one leg. It works about as well as the tubing collar if positioned near the tip, per the photo.

The staggering cost of the final DYI shooting sticks was about $17 – still affordable enough to justify an extra set or two.

However, they won’t obsolete my commercial sticks. The latter’s telescoping legs can be adjusted to shorter lengths, for a smaller footprint in confined spaces and, for now at least, they’re the viable offhand choice.

Inevitably, some fiddling with the friction collars will be required to obtain a level setup of the correct height but, on a positive note, its legs can be retracted to offer a reasonably handy package.

You’ll go with what you have using fixed-length sticks, but the DYI set still feels surprisingly handy. Comparing both sets, my commercial sticks weigh 26.3 ounces – almost three times more than the 9.8-ounce homemade version! I’ll probably call it good as is but, of course, us gun people love to “customize.”

Been mulling over the idea of simple carry system, maybe, rigged from a length of para cord. That and a longer offhand version…