Did you see the LARQ Shark Tank pitch? Justin Wang touted the LARQ water bottle as “the world’s first self-cleaning water bottle that purifies water on the go.” He made the highest valuation ever requested on Shark Tank – and received funding!

Shark Tank, for those not already familiar with the show, is a show where innovative entrepreneurs pitch their ideas to people with money (like Mark Cuban) in hopes of landing startup capital to make their business idea a reality. Shark Tank hoses Lori Greiner and Kevin O’Leary liked it enough to invest $1,000,000 into the business.

Here I want to compare the LARQ to a more traditional (and lower-cost) water bottle, the Nalgene with a twist – a built in filter. If you’re persuaded to buy either, using the following links will mean a small commission will be sent our way (much appreciated if you do):

Let’s cover the LARQ first, however. 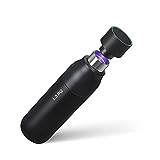 Central to Wang’s business idea was to create a reusable water bottle that not only “cleans” the water but simultaneously rids it of the odor-causing bacteria that anyone who reuses water bottle, particularly plastic water bottles, has become familiar with. This, Wang believed, would prompt people to shell out roughly $100 for a water bottle.

You can watch his pitch here:

The idea of “self-cleaning” certainly sounds attractive, but how does it play out in reality? What does the water purification process look like inside the LARQ?

Push the button on the top of the bottle and activates an internal UV light that in one minute “eradicates 99.9% of the harmful and odor-causing bacteria, viruses, and mold.”

The UV light reflects inside the bottle, purifying the water. It comes with two modes:

An alternative to the LARQ is the more traditional Nalgene bottle that we all know so well. This is exactly the kind of plastic bottle that Wang says smells after a period of time.

The Epic Nalgene bottle takes a more traditional approach to filtering the water – using an actual filter. Unlike the LARQ, it isn’t going to kill the “odor-causing” bacteria inside the bottle, but it will remove it through the filter.

I’m much more familiar with the Nalgene water bottle for general everyday use (I’ve been using them for years). I’ve never actually used a filter for the bottle, however, which is what Epic’s Nalgene includes. Prior to this article, I’d never used a LARQ.

The TLDR version of this comparison is that the LARQ is better for an office environment or yoga studio (to complement your other hoity toity yoga products) and the Epic Nalgene is better for “normal” water filtration use – particularly for the outdoors!

Let’s look at the specifics…

The LARQ weighs 14.3oz (empty) and the Epic Nalgene weighs 9.2oz (including filter without water). When each bottle is filled, the Epic is going to weigh much more from the weight of the water, because it holds nearly twice as much. Thus, with the Epic, you’re getting a much butter weight-to-water ratio.

While there are obvious differences between the two bottles, there are also similarities – mainly removing/killing bacteria in water. As mentioned, the LARQ uses UV light to “clean” the water. The Epic uses a more traditional filter.

There are advantages to each, but the Epic wins in most cases. The LARQ, with its push button cleansing, doesn’t require sipping water through a filter. You can just let it flow directly into your mouth. The Epic will require sucking the water through a straw.

What you get from the Epic, however, is – in my opinion – better filtration. The LARQ isn’t going to remove dirt or sediment. You might be able to stick the bottle in a stream and push the button for adventure mode to clean it for 3 minutes, but when you go to drink it you’re going to be drinking the sediment. The Epic will filter materials out – in addition to the bacteria.

On the flip side of that, the LARQ I’m reviewing is double-walled, which explains the weight. This will give you better insulation to keep your water cold. LARQ does sell a lighter weight single-walled version that is larger in size, but still pricey.

The price comparison between these two bottles is significant. You can essentially buy two Epic Nalgene bottles for the cost of one LARQ bottle.

These bottles have similar goals but have different target audiences (for the most part). The LARQ, funded via Shark Tank, is going to be better suited to an environment where you are getting water from a tap. It keeps your water colder longer. It is more visually appealing. With its (much) higher price tag, it will pair well with a BMW, yoga mat, and other hoity toity products.

The Epic Nalgene is going to serve the outdoorsperson significantly better. It will hold more water, filter matter out, not have to be recharged, etc. With its (much) lower price tag, it will pair well with a bug out backpack, off-road vehicle, or general prepper use. While the LARQ, with its “adventure mode” setting, says it works well for developing countries where you’re unsure of the water – in such a situation – I’ll stick with the Epic.

Those are my thoughts, I welcome yours in the comments section.

Great review!! I saw the Larq bottle on shark tank but this other bottle looks like a better option for sure. The Larq bottle seems like an expensive bottle for $100. I go through water bottles at the rapid rate.