Home ShootingFirearms Magnetic Pistol Mounts – Are They Any Good?
Firearms

Magnetic Pistol Mounts – Are They Any Good?

The ads have been inundating my social media feeds, magnetic pistol mounts in a car, under a desk, etc. The user grabs the pistol, chambers a round while it’s still mounted, and then pulls it off ready to address the threat.

The product looked interesting – a pistol mount that is small, out of the way, and easy to access. But are they any good? Because, honestly, the ads make them look a little cheesy.

Well, there was only one way to answer this question – order one and test it for myself. Fortunately, they are reasonably priced, so that helped make the decision to buy one for review. In fact, they’re so cheap I further questioned – how good can they be? Can you really chamber a round with them?

I ordered the TEGE mount off Amazon as it was on sale. The 2 pack (on sale with free shipping) left each mount priced at roughly $10 each. This was low enough that if I found I wasn’t going to use them after putting them to the test, I wasn’t out a lot of money.

Here is the exact product: 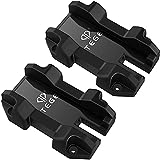 It’s a cheap price. Does that mean it’s a cheap product? They claim you can mount it virtually anywhere. They claim it will hold 55 pounds. Considering the small size of these mounts (what I liked about them in the first place), it seemed like a leap that they’d support 55 pounds. I’d find out!

Here they are, unboxed, with pen for size reference:

Unboxed you have the magnetic mount itself, a foam pad to set inside the mount (if desired), and screws with drywall anchors.

How Do You Install the Mount?

The mount does not include installation instructions, but it’s very easy. There are 4 holes around the mount and 8 screws of 2 different sizes (4 each). Level the mount and screw it into place. I just used my eyes as a level – worked fine.

If you are planning to screw the mount into drywall, you’ll need to know how to install the drywall anchors. The longer screws should be used for this. There were 4 drywall anchors included my mount, but if I was installing this mount into drywall I would spring a few bucks for higher end anchors. The rigidity of better anchors cannot be understated.

My locked room in the basement has an exterior-grade door with deadbolt and on the inside I screwed 3/4″ plywood for ease of installing shelves and to just generally make it more secure overall. Fortunately, this also guaranteed an easy install of these mounts.

Where Can You Install Magnetic Pistol Mounts?

You can mount these anywhere you can drill holes to hold it in place. The most common place include:

Under a desk. This could be useful if you have a desk in an area where personal safety is a concern. There are muzzle-facing concerns with this, however – more on that in a moment.

Attached to a nightstand. This may be a good option for someone who has no kids in the house. I have a locking keypad cabinet for this purpose.

Tucked inside a closet. Depending on the layout of your house, this may make sense. It didn’t for me.

Inside a vehicle. I did not want to install this in any of my vehicles, but it’s well designed for that. For me, it’s not a problem of the mount so much as I just don’t care to store a gun in a vehicle this way. I either don’t leave it in the vehicle at all, keep it locked in the vehicle if I must, or just set it in a case while traveling. Others might have different vehicle needs.

Inside an already-secured room. This is what I used the mounts for. As a prepper, space can get pretty tight pretty fast. By the time you add freeze-dried foods, water storage, and miscellaneous other gear, your supply room starts filling up fast. Then you add a few guns and some ammo storage… you begin stepping over things.

By installing these magnetic pistol mounts in my storage room, which I lock and that includes a dehumidifier, I could leave any pistols outside of cases or holsters. They are then easily accessible while the room remains tidy and organized.

Stay mindful of any legal considerations, of course – and safety!

Take for example mounting it under a desk. In such a case, the muzzle is going to be pointing toward the front end of a desk. Unless your desk abuts a wall, odds that people are going to be walking in front of the muzzle any time the handgun is mounted under the desk. Mind the muzzle!

Backing up a moment, prior to install, I wanted to know whether these magnetic mounts would really hold 55 pounds. In the advertising photos they show the mount holding a 55lb kettlebell by the handle.

The first thing I did was attach a 10lb kettlebell to the mount and hefted it up. It held!

I then moved up, doubling the test to a 20lb kettlebell. It did not hold! I lifted it up and, while the mount almost made it, the 20lb weight detached from the magnet and dropped.

The good news is that – this doesn’t really matter. I don’t know of any 55lb (let alone 20lb) pistols. Ten pounds more than covers most anyone’s needs.

Once I had the TEGE mounts installed, it was time to see what they’d hold in an upright position. I’m an M&P guy and I follow Steve Markwith‘s advice on keeping consistent “systems” in order to create familiarity across different handguns, making moving between them more familiar. Thus, I had 3 M&Ps I could test in the mounts: a full size 9mm, compact size 9mm, and .22LR.

M&P 9mm Shield – mounted and held in the mount perfectly.

M&P 22LR – while it technically “held” inside the mount, it was very loose and was prone to falling off. Why? Not enough metal in the slide to hold it securely.

According to product description, this particular mount will hold most flat top pistols, including:

Chambering a Round Test

The advertising videos show people pushing down on the mount to chamber a round. It seemed easy enough but I wanted to see for myself. In the case of the TEGE mount anyway – it worked!

See the video for proof:

Can You Install the Mount with Glue?

This question I created based on some of the Amazon reviews, one reader saying he was expecting to be able to glue the mount rather than drill screws into his vehicle. No, I don’t think gluing the mount would yield good results in practical use. This seems obvious to me, though.

Does a Gun Have to be in a Holster in a Car?

There are few (if any) laws governing whether a handgun must be kept in a holster while in a car. Legal questions are usually more around whether they can be kept loaded and whether they need to be locked up.

Take California as an example:

California prohibits carrying a loaded firearm in a vehicle in most locations. This prohibition is subject to certain exceptions, including for people who have a valid concealed weapons license.

Of course, you need to do your own legal regal research on the gun laws in your state.

Are Magnets Bad for Bullets or Guns?

I could not find any reason to support the idea that magnets can harm bullets or guns. Still, it seems people are concerned about these theoretical issues.

The biggest “harm” I could see from attaching a gun to a magnetic would be cosmetic harm, i.e. scratching the pistol. In the case of magnetic pistol mounts, however, the contact point is smooth with the surrounding mount encased in plastic. This leaves little chance a pistol would be damaged by the mount.

I was pleasantly surprised. Given the small size of the mount and the low price, it worked (largely) as performed. The photo of the mount holding a 55lb dumbbell, however – don’t believe it. It won’t. But again, does that matter? It holds enough weight to do the job.

I wouldn’t spend a lot of money on one of these unless I had a very specific purpose in mind that only the magnetic mount could fill. That too doesn’t matter, however. The mount is very affordable so using it to just hold pistols in place (as I did) is enough.

Different experience? Any questions? Hit me up in the comments section.