Recently, we here at SHTFblog.com were contacted by the folks at National Geographic regarding a “Blog Carnival” they were hosting to promote their new two hour movie “American Blackout” and the new season of “Doomsday Preppers“. The question they submitted for us to run with was this: “Judging from recent apocalyptic films This is the End and World War Z to ‘what if’ disaster shows like NBC’s Revolution or Nat Geo Channel’s upcoming American Blackout, to reality fare like Doomsday Preppers, it’s safe to say that the “end of the world as we know it” is on everyone’s mind.  But what effect have TV shows and films like these had on the prepping movement?” From NGC’s American Blackout: The father of the Prepper group in Ohio with his supplies in the underground bunker. (Photo Credit: National Geographic Channels/ Stewart Volland)

First off, it’s a tad bit, well, ironic that they’ve asked us about this, since we are probably the only SHTF site where none of the contributors watch much in the way of TV (not that the NatGeo folks knew that, of course.). Movies, yes; TV, not so much. But we have seen our share of these shows from time to time…enough to get the shorthand version of what’s offered out there. I believe that the “prepping movement” is depicted somewhat differently via these two mediums: one leaning towards the short burst of lunacy and wackiness that keeps your attention through commercial breaks, the other showing more “prepared” people who aren’t afraid to machine-gun a squirrel and throw in an explosion or two, since the special effects budget can swing it.  Of course, the way preppers as people are shown in TV and movies run the gamut from a bumbling boob who forgets to pack a can opener in his bomb shelter full of canned goods, all the way to psychotic, violence-craving lunatics who would give Gary Busey on PCP a case of the heebie-jeebies. But how does all of this effect our personal decisions, how does it steer how we prepare for the worst, if it does at all?

Jarhead Survivor, our fearless SHTFblog.com leader, had this to say on the topic:

“Interestingly enough I’ve been thinking about this very topic for awhile now.  The conclusion I’ve come to is that these shows have a huge impact on prepping.

I look at these shows through different lenses.  First, the movie World War Z was just that – a movie for entertainment.  It was one of the better zombie flicks I’ve seen recently.  The plot moved quickly, the characters were good, and it was a real nail biter.  I made some popcorn, grabbed a soft drink and sat back and enjoyed it  immensely.

In prepping “zombies” tend to represent those people who are either totally unprepared or worse, know of your preparations and are out to get them.  How many of you preppers out there have heard people say, “I don’t have to prep.  If anything happens I’m just going to show up at your place.”  Quite a few I’ll wager.

The reality based shows like Doomsday Preppers tend to cast some of the people in a crazy light.   I understand that this is what sells T.V. shows and the people who produce these shows are out there to make money.  They ain’t a charity!

Despite this they do have a lot of good ideas.  A friend of mine watches religiously and after every episode he always says, “Did you see the show last night?  Man, I never thought of doing that!”  In other words these shows do provide a lot of good information and it’s always interesting to see how the experts are going to grade the participants.

One of the things I personally don’t care for is that they are always prepping for something very specific such as, “I’m preparing for a solar flare and the destruction of the electric grid.”  That’s kind of like taking all your money and placing it all on one card game.  The chances of losing are a lot higher that way.

…I think that people who aren’t preppers that watch these shows fall into two categories:  1.  Those that love the entertainment value of watching people dress up in radiation suits (or whatever) and practice their escape from the city.  Or 2.  Those that never really thought about prepping, but after watching a few episode suddenly begin to realize that maybe these “preppers” really are on to something important.

In that light I believe that these T.V. shows are converting more people than a hundred blogs ever could, which is a good thing.  People should have some food and water stored away in case of emergency.  It doesn’t have to be a years supply of MRE’s, but having a month of food in your pantry just might save the day in case of some far fetched scenario like a government shutdown and you’re a federal worker suddenly without a job or a paycheck.  Right?  Remember, a SHTF event doesn’t necessarily mean a solar flare, it could be as simple as losing your job, but if you have some preps stored away that would at least be one area you don’t have to worry about.”

Some good points – by bringing the “prepper movement” to the forefront, these shows and movies heighten awareness. The average Joe could be watching any of these glowing-box offerings, and think to him/herself, “Yeah, these guys may be a little over the top, but basically the premise is sound… Maybe I have room for a few gallons of water and some ramen noodles in the basement or the pantry.” And just like that, these shows are beneficial entertainment. You don’t have to go to the extremes that many of these people do; just upping your preparations in the form of water, food, batteries, candles, whatever, will get you further ahead in case any disaster may befall you or your family. Asteroid strike or blizzard, you’re a bit better off. You might also see a great idea in action, one you’d never thought of…or could even improve upon if you see it fail. Ain’t nothing wrong with learning from mistakes, even if they are cinematic or scripted in nature.

“The Prepper Movement”:, or, “How I learned to Stop Worrying and Love Spam”

The term “prepper movement” covers a lot of people and lumps them into a single term. Yeah, it’s misleading, I think, since it could mean that the aforementioned fellow who throws a couple extra gallons of water in his basement can instantaneously be thought of in the same light as a guy who builds a bunker in the woods and stocks up for doomsday. And let’s face it, folks: due to media portrayal, it ain’t a kind light. I see enough of a stigma in it that people could actually talk themselves out of a perfectly sound idea because they didn’t want to be thought of as a wild-eyed survivalist waiting for the four horsemen. My wife rolls her eyes when I talk about being prepared, because she automatically makes the mental jump that I can’t WAIT for the bombs to fall so I can live by my wits and my rifle…not thinking that the same blankets, food, generator, and water I’ve put aside can keep us comfortable in an ice storm here in the Maine woods, an extended power outage, or hurricane. But you know what? I’m fine with being lumped in with loonies if it means my family is well taken care of during an emergency. Check and mate. 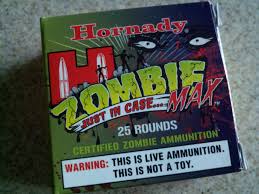 However, due to these movies and TV shows bringing these issues to the forefront (albeit in a skewed way to boost ratings…nobody wants to watch a TV show on a guy who spends 10 dollars a week on water gallons and canned goods. I’ll admit THAT.), it’s now becoming cool to be a prepper/survivalist type. Go to a Cabela’s sometime. Once the bastion of serious outdoorsmen, it’s now littered with zombie-specific ammo, Bear Grylls knives, and five-gallon buckets of freeze dried food. The “Prepper movement” has never had it so easy to find good stuff, (and some ridiculous stuff) custom-made for our way of life.

Folks: these days, if you take the media seriously, you might become a loonie too, over-worrying, not worrying enough. But, hey, it’s there for us to use if we cast upon it in the right light. It’s a tool for us to learn what we CAN do, and what we shouldn’t do. Garner ideas, expound upon them, help friends, build community. Don’t be dragged down by what over-the-top skewed portrayals may be out there; because you know what? You don’t have to go that far if you don’t want to. Ain’t nobody gonna look down their noses at you for trying to be a good provider for your yourself or your family…before or after SHTF. You don’t have to prepare for the Zombie Apocalypse; prepare for a flood, or hurricane: real-life scenarios that are much more likely than dead bodies crawling out of the ground trying to chew on your ass, or complete societal collapse. If that day comes, you’ll be glad you did, and you won’t feel the least bit crazy at all, I promise…you’ll be proud of yourself.

By the way, check the link I highlighted in the first paragraph for “American Blackout”. The trailer alone makes me want to get more batteries. (The actual movie will be shown on the NatGeo Channel on Sunday, Oct. 27th at 9pm. A new season of “Doomsday Preppers starts on the 29th, in case you were wondering.) And while you’re at it, keep an eye on the NatGeo Channel blog website for SHTFblog to be featured!

What do you guys think?  Does the way media portrays prepping influence how you prepare?