If you’re seeking to gather as much information as possible post-disaster, you need a scanner. There’s simply no better means of quickly sifting through the radio spectrum to find intel. Handheld scanners allow you to easily scan through radio communication to see what is going on nearby.

Yes, a waterfall display on a spectrum analyzer is ideal for a home base, but honestly, how convenient is that? What happens if you need to bug-out in a hurry? What happens if you’re on the road? Are you going to have your $3000 HF rig with you? I doubt it.

If armed looters break into your gated community and you had to beat a hasty retreat, a handheld scanner is definitely part of the gear you should consider having ready to head out the door with you.

How is the Uniden brand?

Uniden an alright brand. They’re well-known within the world of scanners and radio equipment. That name recognition has to do a lot with how affordable their scanners are. If somebody is looking to get into the world of radio, Uniden provides a low-cost means of doing so.

Here is my big issue with Uniden: that affordability seemingly comes at the expense of durability.  Uniden scanners just aren’t built as tough as some other companies out there.  My local radio store operator confirmed this for me. He says that Uniden products are consistently being brought to his shop needing repairs.

While the radio store guy specifically talked about CB radios, I would imagine that fragility can be applied across the brand board (That being said, their digital scanners seem to be built out of tougher materials and to a higher standard. I’ll also note I’ve never had the opportunity to use one of those digital scanners myself.)

First Impressions of the Uniden BC125AT

My first impressions of the Uniden BC125AT weren’t stellar. It very much feels like you’re handling a toy. Even the ubiquitous $25 Baofeng UV-5R feels more weighty and durable than this. I really don’t anticipate the Uniden BC125AT scanner being able to withstand much of a jolt. I’m not sating that the Uniden BC125AT is a piece of junk; I just hoped for something with more heft and durability.

The Uniden BC125AT doesn’t have any kind of water resistance either. Post-collapse, that’s not a good thing at all. What happens if it starts raining as you’re en route to your bug-out location? Can you keep your scanner dry? If you’re planning on carrying bug-out electronics, a dry bag system should be considered a must.

If you plan on using the Uniden BC125AT more in your vehicle and home, the issues concerning durability and water proofing might not affect you as much.

The Uniden BC125AT is a pretty bare bones analog scanner. It does have Uniden’s Close Call feature which allows the scanner to instantly lock onto any signal that is within a few hundred feet. The Close Call feature is fairly standard on most Uniden products too; it’s a feature I can really appreciate as it lets me know if someone in the immediate area is transmitting.

The Uniden BC125AT has 500 memory channels where you can store frequencies which can then be separated into ten different banks. Those banks are great way to organize channels, and I enjoy the number of banks provided.

I separate out my banks for easier access.  I keep Bank 1 as my Police Bank, Bank 2 as my EMS Bank, Bank 3 as my Fire Bank, and so on. It just makes things easier to find quickly.

And honestly, as far as features, that’s about it. Like I said, it’s a bare bones system.

Programmability of the Uniden BC125AT

Typically, any radio out there will be able to be programmed both manually and via software. I can’t vouch for programming my Uniden BC125AT via software though; I have always relied on programming them manually instead.

When it comes to inputting massive quantities of frequencies (such as when you first purchase the scanner) programming via software is the fastest way to input data. Programming manually is a good skillset though for when you’re out in the field away from a computer.

If you’re looking for tips on how to manually program your Uniden BC125AT, check out the video below. He does a pretty good job. The manual included with the box does a fairly good job of explaining what you need to know, but personally I’ve always found videos serve me better.

I took about three hours of a lazy Sunday afternoon programming in all my local police, fire, EMS, jail, and school bus frequencies, as well as all my local ham radio repeaters. The process wasn’t difficult – just tedious.

The one thing that doesn’t seem to be explained anywhere in the manual, though, is how to change from one memory bank to the next throughout the programming process. It took me a bit of fiddling to figure that one out.

Each memory bank can hold 50 frequencies in it. Let’s say you want to use Bank 1 for local police/fire/EMS frequencies, but there are only 10 of those frequencies in your area. So, channels 1-10 are now taken up. If you then try to save your local ham radio repeaters starting at channel 11, you’re still going to be stuck in Bank 1.

To switch banks, you have to go to channel 51. Only then can you program into Bank 2. Bank 3 starts at channel 101, Bank 4 at 151 et cetera. That was a minor frustration that took me a bit to figure out. Other than that, I found the Uniden BC125AT to be fairly straightforward to program.

There are several different variables here that can affect range like local geography, interference, height, antenna, etc. From my own experience, however, I was pretty impressed with the distances I was getting out of my Uniden BC125AT. With nothing but the stock antenna from the box, I was consistently picking up transmissions roughly 60 miles away.

This surprised me a lot.  I honestly wasn’t expecting more than maybe 20 miles or so maximum range. For post-collapse purposes, 60 miles is plenty of distance for intel collection.

Personally, I like being able to find aftermarket parts for my gear. Aftermarket accessories can be much cheaper than being trapped with a name brand and paying a premium. Thankfully, radio doesn’t have as much of a problem with this as other fields, but it’s still a factor to consider.

So, can we find upgrades for the Uniden BC125AT that will give us a better experience? Absolutely.

The main component you are going to be able to upgrade is the antenna.  Other parts seem to be harder to find.  But an antenna is the main thing this scanner needs anyway so it suits our purposes here.

AEcreative Wide-Band Scanner Antenna has a pretty good antenna upgrade for all of $25 that will drastically improve your reception. This is a standard upgrade I do anytime I pick up a handheld unit. Swapping the antenna with an improved model is one of the first changes I consider. 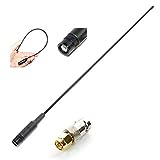 Here’s a pouch that will serve you well for the Uniden BC125AT too: 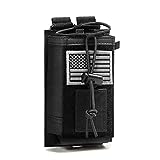 Is the Uniden BC125AT worth the money?

Unfortunately, it really depends on what your purposes are here. If you’re looking for a scanner that can withstand tough conditions while out in the woods, can handle being jostled about, and doesn’t mind a little bit of mist, then the Uniden BC125AT is probably not the scanner for you.

If local urban responder traffic is part of your intelligence gathering plan, I think you’d be much better saving up for the Uniden Home Patrol II, which is capable of picking up those digital signals.

The Uniden BC125AT in Action

One of the primary purposes of a scanner is to pick up as much information as possible, and I think a large part of this is being able to pick up police and other emergency frequencies you should be monitoring.

As I type this, I’m listening to the scanner, hearing reports of a man who has recently walked into a commercial building with a gun in his hand, “acting agitated and cussing.” There’s somebody going 100+ miles per hour down a nearby road. Apparently, the medics have been called to a different site where somebody’s passed out in a lobby. Everybody else in that lobby is freaking out. Somebody’s boyfriend just punched them in the back of the head. An irate man is swinging a stick at another man’s car on the road.

That’s a lot of information I’ve gathered on my nearby surroundings, and it’s only a sampling. But I live in a rural environment, and emergency responders still use analog radio here. I can pick up just about everything in my neck of the woods.

The Uniden BC125AT could be considered a gateway into the world of radio scanning. It is a simple, low-cost option for you to cut your teeth on. You’ll learn the ins and outs of Close Call, be able to rapidly scan through the available radio spectrum, and have a means of intel gathering to boot.

Doing research before you go out and get a radio is extremely important. Knowing whether your local emergency services use digital or analog modes, as well as what frequencies are commonly used in your area can help you figure out what you need in a scanner. Resources like RadioReference.com can help get you started. If your local resources use analog, you’re in good shape with the Uniden BC125AT.

If you don’t plan on being out in the woods much, then I would say go ahead and make the purchase. The Uniden BC125AT is a solid, affordable scanner if you don’t plan on roughing it up too much.  If you do plan on taking it out into the woods, then you’re really going to want to keep this radio protected. Don’t pull it out in bad weather or you’re probably going to have problems.

Overall though, I’d say you should skip this scanner. Find something a little bit more robust and I think you’ll be happier. It’s not that this scanner can’t provide you with information, but not having to worry about taking care of it and keeping it dry is well worth the extra money to get something you’re truly satisfied with.

The bottom line with the Uniden BC125AT seems to be this: you get what you pay for. That’s not an adage that I like to over apply, but it does ring true here.

Honestly, I think you’d be better off saving your money for a one-and-done purchase with a digital scanner (you may want to check out this below unit by Uniden if you like the look of the BC125AT). But again – you get what you pay for.

What are your thoughts? Are there other scanners you recommend? Have you run the Uniden BC125AT before? Let us know in the comments below!

How to Make a Leather Sling (and how to use it)

I live in Florida and found out that emergency services, (fire,EMS,police), did go digital but also use encrypted signals. Are there any scanners that will allow receipt of transmissions?