Among the pistol-caliber carbines (PCCs), a good portion are chambered for the ubiquitous 9mm in AR-15 platforms. I’m no stranger to them, but much of my experience involved submachine guns (SMGs) that ran off Sten Gun magazines.

The latest genre use standard Glock magazines that fit special lower receivers. The concept of a common-caliber handgun (that I cover at length in my Survival Guns book) and rifle has always had great appeal, and given the huge resurgence of the 9mm, the latest marriage is a well-timed event. As it turns out, a 9mm PCC also has value for home defense, and many are equipped with dot-sights for use within tight quarters.

The concept seemed like a good idea to me, so I finally took the plunge and sprung for a Windham Weaponry 16-inch 9mm Carbine.

If something does go bump in the night, a fiddly system can create barely-awake nightmares. Thus, starting with access, my plan was to secure the new PCC system in a small but fast-access upright safe (like Hornady’s RFID Compact Gun Vault). I was all-in on dot-sights but, once again, it would need to be a fiddle-free design – something I could just grab at 0230 and deploy with a high degree of confidence. 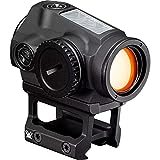 Long battery life factored in heavily and, although many of today’s small “open emitter” mini red-dot sight (MRDS) units fit this bill, some “closed-emitter” designs also measure up. Most of the latter will also accommodate lens caps, useful for warding off dust. Of course, the heart of these sights is the dot (or reticle). Between LE and sporting experiences, I’ve used a bunch sized from 6-MOA to 2-MOA.

At close-quarter distances a bigger reticle has few drawbacks. But, since my PCC was also earmarked for occasional critter control, a finer 2 MOA dot was preferred. Fortunately, the arrival of my 9mm carbine coincided with an opportunity to try a new dot-sight from Vortex Optics. Happily, it checked the above boxes for a reasonable price, and came with a great warranty.

Vortex has been coming on big during recent years. They catalog a comprehensive line of scopes, dot-sights, and other optics. Their dot-sight line includes two SPARC-AR models and, as their names imply, both are designed for AR-15s.

I have experience with several other Vortex products, and one feature I‘ve always appreciated was the packaging. The pertinent specifications (normally available only through extra searching) make a great starting point for a purchaser because they’re clearly printed on the box. I’ll let the photos cover these details.

A low version is factory installed. A taller, skeletonized mount is packed separately, along with four extra screws and a plastic-handled Torx wrench that doubles as a turret-adjustment device.

A lens cloth and very clear set of directions are also included. It’s worth perusing the directions to understand the mounting heights, as well as the function of the controls.

The sight’s rubber lens caps are tethered to the battery housing on its right side. As it turns out, the opaque caps are designed to nest together when removed. To prevent aggravating floppage, they can be pressed over the sight’s battery cap.

The battery cover can be unscrewed using a coin. Inside, I discovered a preinstalled CR-2032 battery, disabled by a layer of plastic. Unlike a number of other designs I’ve played with, the SPARC’s power controls are separate.

Much of its upper surface is covered by a rectangular solar panel, designed to augment power supplied by the battery. With sunlight in the mix, the battery is rated to last up to 150,000 hours!

After the solar panel, two exposed but recessed turrets provide elevation and windage adjustments. Each turret has a coin-slot, and a directional arrow, surrounded by an unnumbered radial scale. The corresponding clicks provide 1-MOA adjustments; a generous 120 MOA in total.

Two rubber key pads (+ and – ) located on the sight’s left side, control its various functions. For me, this was an ideal spot because my AR is also equipped with a set of folding backup iron sights (BUIS). If the rear sight is in close proximity to the dot sight, access of the controls is easier than most rear designs.

Also worth noting, the SPARC-AR Solar is advertised as waterproof (instead of water-resistant), and comes with a Vortex lifetime warranty.

After unscrewing the compartment’s cap, I removed the plastic battery protector, reinstalled the parts, and began toggling through the rubber “+” touch-pad. Each press resulted in a progressively brighter red aiming dot that started with a couple very faint night-vision settings (for use with rear-mounted NVDs). There are 12 settings in all.

Although listed as 2 MOA, the highest setting is plenty bright – even in summer sunlight against white targets. For me, setting #7 was a good compromise that was visible in many conditions, but fine enough for precise shots on smaller targets. One thing that really helped was the reticle’s nice round dot. Some others can appear less distinct or irregular with annoying flares.

The “-“ pad serves a couple purposes. Each momentary press decreases the intensity of the reticle. A 5-second press will turn it off. To turn it on again, press the “+” pad. The reticle will illuminate to its previous setting; a useful feature for me. The absence of extra button-presses or dial manipulations translate to KISS operation, a biggy under stress in the dark. And, we can get even simpler…

This sight is designed to switch off automatically after sitting for 14 hours, undisturbed. Upon detecting new movement the reticle will be reenergized to its last setting. I tested this feature twice with success, although both shut-offs occurred somewhere around 17 hours.

Reactivation didn’t take much, either! During both tests, as soon as I touched the firearm, the reticle reappeared. In a vehicle this feature may not be practical, but it should work well for static storage in most locations. Knowing this, I’ll store the SPARC powered-up to my preferred setting for a grab & go response.

The two mounts supplied with the sight are solid designs. Each has a square lug in its upper surface that locks into a corresponding recess underneath the sight body. Four Torx screws then suck both pieces firmly together through the recommended 20 inch-pounds.

The low mount locates the center of the sight 22mm above the base surface. It’s the choice for many non-AR designs like Ruger’s PCC 9mm, or others with more conventional stocks.

The high mount is for flat-top ARs. It elevates the reticle to 40mm to provide a BUIS co-witness in the lower 1/3 of the SPARC’s field of view.

The bases employ a single clamping plate. It’s secured to the rail by two cross-screws, spaced for engagement of the slots in Picatinny rails. Of note, some Weaver-type bases may not be compatible unless modified to match this pattern.

Mounting the SPARC to my Windham Weaponry 9mm Carbine was an easy process. The sight is short enough to accommodate individual preferences so, thanks to its side-controls, I cinched mine up just ahead of the folding BUIS rear. Bore-sighting was also a breeze (the process is included in the directions).

As unboxed, the adjustments appeared to be optically centered. It only took five MOA of elevation (2 ½”) to center an 8-inch round plate in the bore at 50 yards. The clicks were positive, so there wasn’t any guessing. BUT, don’t ignore the SPARC’s turret arrows! They’re reversed from most rifle scopes!

Shooting commenced at my backyard shooting range at 50 yards using Federal 9mm American Eagle FMJs. Sure enough, the first three shots struck in close proximity to my “bullseye”; a white paper plate stabled to a brown cardboard IPSC target. Looks a bit weird but the visual seems right with a dot.

I came up three clicks and left four. Within six shots, the 1-MOA turret graduations had me on the money at 50 yards. We use the same distance to zero our agency’s 9mm buzz-guns, so I stuck with it and switched to other targets while playing with the sight’s reticle settings.

The above noted reticle setting offered useful precision, even during midday sunlight. The BUIS alternative also worked well in the lower third of the SPARC’s lens.

I normally include tracking checks with rifle scope reviews, but dot sights are a different deal. Like most others, once I’ve established a zero, the turrets usually stay put.

As noted above, the adjustments seemed positive, and no zero shifts were noted. This, despite the fairly snappy recoil of a 9mm AR, produced by its heavy blow-back bolt. As far as 9mm carbine range work goes, the SPARC Solar earned a solid passing score.

Each is equipped with an Aimpoint Pro dot-sight, and a co-witnessing folding BUIS rear. We zero at 50 yards using 55-grain FMJs, which also puts them on the money at 200 yards.

Beyond a fairly standard 100-yard qual-course, we also incorporate shooting at longer distances. The targets are steel combat silhouettes. We shoot the 2 MOA Aimpoint Pros out to 300 yards (or further) – a pretty good poke for a dot sight.

For what it’s worth, previously, we used 6.5 MOA Trijicon Reflex Sights. Although less precise, they worked surprisingly well. Here’s our dot-sight strategy.

50 Yards Zero distance: Once established, sighting-in a folding BUIS system is easy – if it co-witnesses with the dot. Adjust as necessary, turn off the dot, and then tweak the irons. That won’t work with this SPARC though.

200 Yards Using the 50-yard zero (with 55-grain FMJs), aim dead-on. But, remember, any 1 MOA adjustment will translate to a 2” correction at that distance. Since these sights aren’t designed for constant dialing, strive for a careful initial zero during calm conditions.

300 Yards When engaging humanoid steel combat silhouette targets, hits come with regularity by holding just below their “necks” – as long as the wind is factored in.

FYI, some windage errors can be attributable to cant; easy to do with a basic dot-type reticle (our staff use the ears of their M-4 front sights as makeshift levels). On a positive note, the SPARC is advertised as parallax free, meaning head-placement is less critical.

Our agency patrol carbines lead a hard life. Thus, they’re well-served by their Aimpoint Pros. But, for less rigorous uses, if balancing features and quality against cost, the Vortex SPARC Solar seems like a good deal.

It’s also lighter, which helps when adding accessories. A firearm earmarked for home defense should really have a light. Some of the extra weight could be offset through a pistol-type AR with better maneuverability, but I wanted a 9mm carbine for several reasons (and I also have a light-equipped handgun).

Increased weight is less of an issue around the hacienda, but it’s still worth considering due to circumstances less often considered, such as prolonged readiness – anything from searches to coverage of a suspect. Smaller sights can also mitigate inertial effects generated through recoil. The jury’s still out regarding steady use with calibers like a .308, but Vortex does offer that VIP warranty.

Gripes are few. Since my SPARC Solar will see most of its time in a dark steel box, its unaided battery-life remains to be seen (I still chose this version due to its side controls). I’d prefer a true co-witness of the dot with a BUIS system, but it’s strictly a personal preference. Other than that, although my specimen works well, the fine print below the box’s bar code reads “Made In China.”