Home Miscellaneous You Are Being Monitored by Big Brother

You Are Being Monitored by Big Brother

I’m not paranoid.  I don’t own a tin foil hat.  Hell, I don’t even have anything to hide.   But it’s not only possible that you have been monitored by big brother, but highly likely that something you’ve written, bought, said on the phone, or done in public has been monitored by some government agency.  Even going shopping in today’s age you’re likely to wind up on a store’s video surveillance camera.  That’s what we get for living in a high tech society.

But I’m talking about something more personal than that. 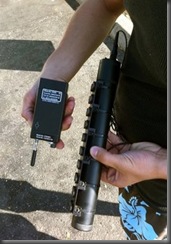 says, “Hey!  What’s that strange wire coming out of your chassis?”  That’s exactly what happened to a 20 year old college student from California.  When neither one could figure out what it was the student posted pictures of the device online.

An ex agent recognized it and replied to the post telling him it was a GPS tracking device used by the FBI.  Two days later the FBI knocks on the kid’s door and demands their property back.  Check the story here.

The kid’s crime?  His name is Yasir Afifi and his brothers live in Egypt.  This case is now the center of a raging debate over privacy rights and I can see why.  Being a loyal American and a former Marine I’m aghast at the way the country is now being run.   I’m all for protecting the country against terrorism, but I think the government has taken the whole idea of monitoring what goes on inside the country a little too far.  A lot too far, actually.  The question then becomes, “What’s too much surveillance?  What’s enough?  What’s not enough?”

I’m sure there will be people on both sides of this issue; however, I think that when someone in this country can go to their mechanic and find a tracking device on their vehicle then it’s gone too far.  It could happen to anyone whether their name is Yasir Afifi or Johnny Smith, as long as the government deems that the person needs watching.

Sly Stallone starred in a movie a few years (or more) back called Demolition Man (which kicked ass) about a cop who is cryogenically frozen and wakes up in the future.  In this future there is no crime, but everybody’s movement is followed through the use of tracking devices that have been inserted into their bodies.

We’ve already got a product similar to that called Lojack that is used to track vehicles that have been stolen.  The vehicle is equipped with the Lojack product and if stolen is tracked by the police.  You can also Lojack your laptop, your motorcycle or your Aunt Harriet if she has Alzheimer’s.  It seems to me that every year we give up a little more of our freedom in the name of protection from terrorism, but at some point we have to decide that enough is enough or we might be living some version of Orwell’s 1984.

What do you think?  Is there too much surveillance in this country?  Is there not enough?  What would you do if someone showed up on your doorstep after an emergency and demanded your guns?  Think it couldn’t happen?  Think again.  The guy’s comment at the end of this video sums it up.

Excuse me, but I have to go build a tin foil hat and get my radar going to monitor the black helicopters I’ve seen buzzing around lately.

13 Ways to Prepare for a Contested Election

What is TEOTWAWKI? A Complete Explanation.

What is SHTF? Meaning, Examples, and Planning

How Likely is a SHTF Scenario or Situation?

I seem to recall in ’08 that the Dems were strongly complaining about George Bush policies of Homeland Security violating rights of citizens. What have they done in the past 2 years to rescind them> Nothing, nada, zero – who didn’t see that coming?

Its probably going to bite some folks in the butt, eventually. People who run for office continually have their pasts brought up in elections. No doubt, a comment made in cyberspace will eventually be used as evidence in a future trial of someone.

j.r. – it’s worse than that, after complaining about the DHS and promising transparency, the Dems did do something: they extended the Patriot Act, restricted more government programs from the FOIA (opposite of transparency), and Obama extended the “state of emergency” that has been going on since 9/11, giving the president potential dictatorial powers via the Patriot Act.

The U.S. is now #40 in the world for privacy and in the bottom classification, along with China and Russia.

Fortunately, the future looks bright! No, no, no, … not the elections… the future looks bright because the whole world is relying more and more on technology and the internet, and when the next Carrington Event scale solar storm, or cyber war (Stuxnet??), or real war happens, all the tax records, property records, debt records, etc. will disappear as the electrical and internet grid melts, collapses, and/or is destroyed.

I would have attached some batteries and put that bad boy on a stray dog! Let em chase after that for a while!!

@Jack and J.R. – I’m not sure how they got away with calling it the Patriot Act. Our forefathers would have had a fit if they saw what it entails.

Got a buddy in DHS. Told me some of the criteria for being on their watch list as a potential domestic terrorist. Former military. NRA member (past or present). Buying ammo, food, or seeds in bulk. Pro gun, or anti- gov’t tee’s or bumper stickers. Those are just a few. He later verified that I was on the list. Now that’s just good livin’!

We participate in the Amazon Services LLC Associates Program, designed to provide a means for sites to earn advertising fees by advertising and linking reviews to Amazon. As an Amazon associate, we earn from qualifying purchases. SHTFblog.com also participates in various other affiliate programs, and we may get a commission through purchases made through our links. Please read our complete Disclosures and Privacy Policy for more information.