A rare day of mild February temperatures put me in the mood to plink some spinner targets, but before breaking out a .22 rifle, an exploratory mission seemed prudent. Big disappointment there! The sun was shining, and the wind was light, but the entire area surrounding my backyard shooting range was a glistening sheet of ice. What to do?

The operative word here is “airgun.” I could’ve safely shot the same .22 LR rimfire within it, at least as far as the backstop was concerned, but even a switch to low-velocity .22 Shorts or CB Caps would’ve opened up a Pandora’s Box of other issues – one involving lead toxicity.

The design and construction of a viable commercial indoor shooting range is an expensive proposition. Safe containment and an effective backstop are the obvious concerns, but a surprising percentage of the cost is driven by lighting, ventilation, and necessary maintenance.

Some indoor ranges I’ve been privy to over the years were state of the art. Others were pretty sketchy. A few were more like toxic versions of Chernobyl, heavily contaminated by lead residue that coated interior walls, ceilings, and their iffy ventilation systems. If you’re breathing smoke you’re inhaling lead, from both airborne emissions and projectile impacts.

Another potential hazard is unburned powder. More than once, I’ve swept up a tidy pile from a concrete floor. Toss a match into it and it’ll ignite at full force – nothing you’d want in your residence! Also, many indoor ranges are loud.

Just about all of these concerns evaporate with an airgun – or at least those most commonly encountered (see below). No airborne contaminants, special maintenance requirements, or ear-splitting noise. For this reason competitive airgun events are often run within non-typical “ranges” such as school gymnasiums, etc.

Beyond strict safety protocols, the reason for their ongoing success boils down to the backstop – a relatively simple system capable of capturing lower-velocity airgun pellets.  If it’s good enough for a public school, it’ll probably work in your basement – with a bit of planning and the right airgun.

Today’s airguns include pretty much everything from basic spring-powered BB guns to .45 and .50-caliber pneumatic thumpers. The latter are serious hunting guns, fully capable of taking large game animals. But the safer and more practical pick for indoor use is an airgun designed to shoot commonly available BBs, and/or .177 – .22-caliber “pellets.” The less popular .20-caliber qualifies too, as does the larger .25 caliber – with a caveat.

More .25s are used to hunt small game, etc. Like some .22-caliber air rifles, they can exceed 900 feet per second (fps) but, as a rule, .25s hit harder due to their heavier projectiles.

All can be safely shot inside some structures with proper precautions, but low mass and velocity open up more possibilities – a virtue of many .177-caliber airguns.

That said, I regularly shoot three .22-caliber airguns in my basement range. One, a barrel-cocking Beeman R-9 “springer,” clocks around 700 fps with average-weight 14.3-grain JSB pellets. The other two are Air Arms pre-charged pneumatic (PCP) rifles. The AA carbine does 820 fps with the same pellets.

Some widely sold .177-caliber springers can crack 1000 fps thanks to lighter pellets. At 1000 fps, a standard-weight 7.9-grain JSB will develop around 18 ft. lbs. If you own one, it’ll certainly work indoors. However peak accuracy can suffer with fast hourglass-shaped pellets, one reason why match-type airguns are .177s, rated for less than 600 fps (the same guns you’ll see in league events). 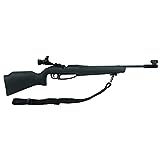 Since most CO-2 powered rifles (either .177 or .22) clock similar velocities, they’re great indoor candidates – an approach that can also eliminate low-pressure issues related to cold weather.

Most CO-2 and spring pistols shoot under 500 fps – still faster than many BB guns. A few PCP versions like Benjamin’s .22 Marauder can reach 700 fps – still doable with the right backstop.

Ralphie’s Red Ryder – the same BB gun that could shoot your eye out – shoots more in the 300 fps league. The steel spheres are light, but they can ricochet like crazy off of hard surfaces (see below).

Although low-powered airguns are the route to the simplest indoor “ranges,” the more potent versions can be managed for a reasonable cost with a bit of planning.

A large cardboard box stuffed full of newspapers can serve as a backstop for a lower-powered BB gun, but it’s really just a temporary solution. Sooner or later the paper will be shredded as repeat barrages of hard BBs chew their way through its contents – assuming they all hit. A steel BB that strikes a hard surface (like a concrete wall) will probably return at full force!

Which takes us to the consequences of inevitable misses and unintended discharges!

My indoor range is located in the full-length basement underneath our living quarters. Its poured concrete walls will easily stop anything within reason – but what about the ceiling?

Actually, the exposed floor joists serve as baffles, a containment strategy used for some indoor and outdoor ranges. Still, playing it safe, I won’t shoot anything that could enter the upstairs living area – which could include an innocuous .22 Short.

Some airgunners use their garages as ranges, leading to concerns about wall penetration – and anything beyond. Others limited to living spaces turn hallways into airgun ranges. These solutions could be doable with the right airgun but, sooner or later, there’s gonna be a miss.

If unsure, you could try some test shots on sample construction materials. Or the safer and easier alternative could be an air soft gun. They’re lots of fun, and because they shoot lightweight plastic “BBs,” most penetration and all lead concerns will become nonissues.

Most hallways have doorways, raising the possibility of downrange intrusion. To a lesser extent I’m in the same situation with my basement range, which utilizes two separate sections connected by a doorway. To gain maximum distance, the firing line is in one room and the backstop is in the other – a less than ideal situation that limits the visible area surrounding the backstop.

However, since the only other entrance to the target area is an external door, pre-shooting SOP is as simple as a quick check of that section and the exterior door’s lock. I don’t have any windows to worry about, but if I did, I’d cover them.

My basement ceiling is unfinished, so some overhead wiring and plumbing is exposed. This could be less of a concern at closer ranges, but I can squeak out 20 yards. The result is a decreased upward angle needed to cause some expensive mayhem. I’m the sole shooter but, admittedly, it’s still a gamble.

On the other hand, a vertical run of wiring and its outlet are just too close to my backstop to ignore. I shielded them with a length of 2×8, and a larger sheet of OSB. For good measure, I also placed a spare foam arrow backstop between the OSB and trap – mostly to intercept a ricochet (less likely with lead pellets).

If you only have 15 feet of available shooting space, you have enough room for a regulation BB gun course – fun for youngsters and adults. You can even buy one from Daisy.

The official distance for .177 airguns is 10 meters (33 feet). A standard for indoor .22 events has long been 50 feet. Another common distance is 25 yards – if any of this even matters. You can buy official targets, print your own, or just wing it.

Most of us can get by with an improvised system.I bought a clamp-on spotlight bell and plugged it into an overhead light socket via a screw-in pull-chain adapter. The spotlight is angled downward toward my trap plenty of light. It’s high enough that I’m not worried about errant shots, but it would be easy enough to shield.

Unless you’re shooting an unmoderated air rifle (no built-in suppressor) in a small, enclosed space, ear protection will probably be unnecessary. However, more for garage shooters, some “magnum” class sporting airguns do produce a telltale snap. 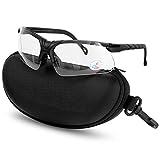 The main concerns about lead toxicity are confined to the handling of pellets. But the easy solution (literally) is soap and water. Lead becomes a non-issue with common BBs. Recent zinc-alloy pellets, sold to fly faster than lead versions, are another possibility.

Again, it’s worth planning for worse-case scenarios. And the further you back up, the smaller your backstop will seem. The opening of my steel 8×9” trap seems a lot more cavernous at 10 meters than it does at 20 yards – one reason I surrounded it with additional shielding.

Regarding specific designs, there’s so much information on-line that you’re better off searching “pellet traps” to get a handle on the myriad possibilities. You’ll find useful information about BB systems, too.

As noted above, paper isn’t a long-term solution. A sheet of hanging carpet could be okay for a basic Red Ryder, but some pump-up pneumatics are downright zippy. Assuming you have the former, Daisy has a $17 solution – one that’s lead-free, too!

Hard surfaces are a no-go (including wood) because of potential ricochet hazards. Although a .22 rimfire-rated steel trap will stop all common airgun pellets, it’ll spit BBs back with authority! FYI, some BB guns will feed disintegrating Dust Devils.

Turns out a thick wad of Duct Seal will stop airgun pellets and BBs cold. The stuff is sorta like heavy-duty modeling clay, but it’s a whole lot denser (clay won’t work). Anyone with basic tool skills should be able to construct a useful trap after a trip to the local hardware store.

Another clever DYI option is a large plastic container full of recycled rubber mulch. The lid end is placed horizontally to hold a target. A few brisk shakes now and then redistribute the contents for continued use. Supposedly, a waste-basket sized “trap” will safely capture fast .22-caliber pellets.

Commercial Pellet Traps: For around $80, you can buy a ready-made Duct Seal trap.

If BBs are out of the picture, a steel trap rated for .22 LR rounds will handle all conventional airgun projectiles.

Downsides: They emit a noisy clang – and, possibly, some lead dust. However, almost all of the larger chunks will be contained for eventual disposal. My 50-plus year old Detroit Bullet Trap has soaked up vast quantities of lead projectiles without a quiver. This is very similar to today’s Champion Heavy Duty Metal Trap. To capture any escaping lead, I just nest it in an open-fronted cardboard box.

Reactive targets are fun but steel spinners will splatter lead – and some synthetic versions may shoot back! It’s easy enough to eliminate these concerns though, through the use of paper targets.

Foot-pound Caution: Some commercial backstops and target systems have power limits. The cutoff is sometimes 20 ft. lbs., which rules out many so-called “magnum” air rifles. Exceed the limit and dented surfaces could form to cause dangerous ricochets – another reason for those glasses!

For both beginners and experienced shooters, thanks to the absence of recoil and muzzle blast, airguns provide flinch-free opportunities to concentrate on marksmanship skills.

A further bonus: Airgun ammunition is still inexpensive and still widely available, too. Gasoline? Who knows! Meanwhile, if you have your own airgun range, the commute will be short and inexpensive.

For more information about airgun ranges, be sure to check out the NRA’s Home Airgun Program guide, available online for free.

For more info about air rifles, see my book: Air Rifles: A Buyer’s and Shooter’s Guide.