Home Food and WaterCooking Can You Use a Propane Stove Indoors Safely?
Cooking

Can You Use a Propane Stove Indoors Safely?

When the power goes out and people look for a way to make a cup of coffee or a meal indoors, they naturally think of their propane camping stove, but that’s always been something they use outdoors. This leaves some wondering…

Is it safe to use a propane stove indoors?

Yes, it is safe to use a propane stove indoors, but there are safety precautions you should take.

Why Propane Stoves are Great for Off-Grid Cooking

Investing in off-grid cooking equipment is a basic level prep. If you don’t have this covered, you need to cover that base. Even if it’s just a simple one-person hiking stove. Many preppers have turned to portable hiking stoves – products that serve well in bug out bags. They may also look to larger camping-style propane stoves suitable of cooking for a group.

But given the frequency of power outages, it makes sense to invest in a camping-style propane stove that use can use for cooking food in a crisis. The bonus here is that unlike some preps that you just store on a shelf in case a catastrophe hits, portable propane stoves can be used even in “normal” times for summer camping, tailgating, etc. They’re worth the purchase.

You’ll find their real value when the grid goes down, however. Yes, you can fire up the charcoal or gas grill to make dinner in a pinch (never use a charcoal grill inside). But if you live in a northern climate like I do, and power goes out from winter storms, bundling up to make scrambled eggs and coffee outside on the grill is going to get very old very fast.

If you have buckets full of dehydrated food as part of your longer-term preps, you often need to heat water in order to make it palatable. Otherwise you could be left with an unappetizing mush.

Propane camping stoves are functionally the same as the domestic and commercial propane ranges found in restaurants and homes. Propane comes in the supply line and ignited at the burner. A knob controls the flow of propane.

Each of these examples involved large propane tanks not used for camping stoves, but the point is that propane explosions can happen, and they can kill you.

This should be a given. Anytime you’re operating with a fuel source that’s generating a flame, there is going to be a risk of fire. The internet is rife with stories of people who have burned themselves to death because of toying around with a propane stove or heater.

Case in point would be this 79-year-old man who attempted to cook with a propane stove inside of his RV. He burned the whole thing down, burned 30% of his body, and died from his injuries not long afterward. Would this have happened if he was cooking with propane outside? Almost certainly not.

This odorless, colorless, and tasteless gas is poisonous to humans. Carbon monoxide poisoning is the leading cause of poisoning death. Your cells aren’t able to get the oxygen they need to survive.

Need proof of the risk? Check out the following examples:

Once you pass out (or should you be asleep when the CO leak is happening), unless somebody is nearby to rescue you, you’re done for.

The Coleman name dominates the camping world, so it probably comes as no surprise that some of the most highly-rated propane stoves on Amazon are Colemans. The brand is known for decent quality at a fair price. You can buy cheaper stoves or fancier ones, but Coleman offers a good middle ground.

I have owned and used the Coleman white gas equivalent of this stove for many years. If I had to buy it over again, I’d but the propane version. The stove has a thinner profile and the fuel burns cleaner. The stove collapses and folds up. It’s easy to store and very portable. 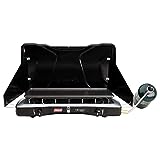 Two burners allow you to heat a few things at once. You’re limited small to mid-size pots or pans, but that should suffice for most people cooking in a pinch.

There’s something to be said for having a single propane burner alongside a double burner stove. This Coleman single burner throws more BTUs and allows for a bigger pot or pan. 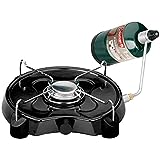 Coupled with a two-burner stove, it creates more options for cooking. For a single person, a one-burner propane stove may be enough.

If you’re planning to use a camping stove for emergencies, have plenty of fuel on hand. Never store propane fuel cylinders indoors. Bring it inside only for immediate cooking use and then remove it after.

Leave these fuel cylinders stored in a garage or shed. In fact, it’s a violation of building codes to do store tanks inside in many states. 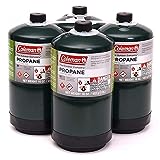 Propane cylinders can last for 30 years or longer if they are properly stored and in good shape. That’s about the same shelf life as freeze-dried foods, making propane a great fuel to store for cooking in a long-term collapse.

How to Safely Use a Propane Stove Indoors

I recommend everyone have one of these near the heating and cooking areas of a house. Because you cannot smell carbon monoxide, this detector will alert you to the presence of CO.

Like their sister, the smoke detector, carbon monoxide detectors can help save your life.

Creating airflow around your stove will reduce the chance of gas buildup. A camping stove is designed for a well-ventilated area – outdoors. Replicate this as best as you can indoors. Open a window. Turn on a fan. Move air.

How to Detect Propane Leaks

According to AmeriGas, there are three main ways to detect if you have a propane leak. The first is to use your nose.

While carbon monoxide is generally odorless, propane companies throughout the US often add an odorant to their propane that smells like rotten eggs. Should there be a leak, propane which has had this smell added to it will quickly alert anybody inside that there is a propane leak.

If you normally only use X amount of propane a month, and you notice that there’s a strange discrepancy in your usage rates – showing that your consumption of propane has drastically spiked – a leak is a probable culprit.

Whether you’re using gas logs or some other form of propane equipment, if you notice that it’s not operating at its standard level of strength, there’s a very good chance that a leak is what’s causing the problem.

Propane camping stoves are great stoves when used for what they’re designed for – outdoor use. However, in a pinch with the right safety precautions, you can use one indoors.

How to Find a Bug Out Location

Appetite Fatigue – 3 Ways to Fix it in Food Storage

Thanks, Bigus. You can, and the fumes would theoretically go up the chimney. You’d still have a fuel tank inside. This article isn’t meant to say you can’t ever do it. It’s meant to argue that it’s always safer/better to use it outside.

The difference is all of the items you listed direct vent to the outdoors and have a fuel source (propane tank or natural gas source) located outside.

Couple things to add:
** Try to setup the stove where you have good ventilation available. In my case I had a rental place I moved into that I had to purchase my own stove for. Since I didn’t have the budget to buy one immediately, I lived by cooking on a small stove. When I setup, I used it in the same location the regular stove would be so that I could take advantage of the range hood which does vent outside.
** Not all range hoods vent outside so be aware of what ventilation you have available. Consider opening a window if you live in a sealed house like many are where the weather is pretty harsh. Sometimes, like when its raining, I’ll move the propane BBQ into the garage to cook, but I always leave at least one door open to allow airflow.
** For indoor cooking, you may want to stay with a smaller camp stove like those suggested in the article. The larger Camp Chef type stoves are better in high ventilation areas. But they do make great back up burners if you need that much cooking support, especially if you’re having to also heat water for washing purposes.
** In addition to the propane stoves mentioned, there are butane stoves available in both single and double burners. They are very common in Asian markets, and not too expensive. Some are available that are setup with propane conversion kits, but either fuel works. Butane has a higher BTU rating then Propane but is really subject to altitude and temperature issues causing it to start freezing and losing pressure under cool or extended cooking conditions. These units are plenty adequate despite the issues with butane, depending on your needs. I know this firsthand as I spent 4-6 months cooking for a family of four on one until I could buy a regular stove.