12 Hidden Weapons No One Would Expect

When it comes to hidden weapons, a concealed gun is the ultimate equalizer. However, maybe there are some circumstances where you need a weapon that isn’t a gun. Maybe there are legal hurdles for you to carry a concealed firearm – or maybe you’re just uncomfortable with firearms.

If you’re used to regularly carrying a firearm, this can quickly lead to the feeling as if you’re walking around naked. And while perhaps strapping on a Crocodile Dundee bowie knife to your hip sounds like an extra additional layer of protection, most times you’re going to want something a bit more discrete.

To aid you in your quest to be able to defend yourself without raising the eyebrows of every other person you meet, here are 13 hidden weapons no one would expect.

Be Careful of the Law

Perhaps it should come as no surprise to the reader that laws throughout the U.S. differ dramatically. What is legal to own and carry around daily may be fine in one city/state but could result in a weapons violation in another, sometimes just for owning it. Where knives are particularly popular hidden weapons, we have an article dedicated solely to knife laws in the 50 states. That article should not be seen as legal advice (laws are always changing), but it should give you an idea on how much laws can differ.

While I fully agree that the Second Amendment protects all weapons, and that any law that violates such is ridiculous (I can carry a gun, but I can’t carry a knife 6” long?) the fact is that if you’re found with some of these items listed below, there are certain actions you can reliably predict badged individuals will then take against you.

So, yes, observe what the rules are in your area for any of the below. That responsibility falls on you, not us. Do your due diligence, and don’t buy or carry something illegal for your area.

There is a lot to be said for the element of surprise, and in a self-defense situation, that’s where hidden/discrete weapons can be useful tools that will still give you a force multiplier against an assailant.

As Sun Tzu pointed in The Art of War, the element of surprise does matter. It can make a world of difference in a fight when the helpless victim is able to quickly reveal they’re not so helpless after all.

We start with a concealed handgun because that is overwhelmingly the hidden weapon choice of many. I’m not going to explain why, it’s self-evident. Nor am I going to try arguing which concealed carry handgun is best, because that is a rabbit hole not worth venturing down. Derrick did it with his top guns for SHTF, and the comments section went wild.

If you’re landing on this article via a Google search, however, odds are you’re looking for a hidden weapon that is something other than a firearm, or maybe you’re looking for something in addition to a handgun. This is entirely okay, because many weapons can be just as lethal. In fact, if you look at the weapons most used in homicides, firearms are the bulk of the weapons, but knives make up over 10% of the list and “other weapons” make up over 11%. In other words, you don’t need a gun to effectively defend yourself with lethal force.

That brings us to the rest of the list.

Sticks have long been used for self-defense purposes, and a cane is an even better “stick” for self-defense. In fact, some older adults are becoming trained in Cane Fu, a style of martial art focused on the case as a weapon, one of the hidden weapons that hides in plain sight.

This is a socially acceptable means of always having a stick on your person (baseball bats seem to have something of a stigma, after all). It’s particularly great for people with limited mobility who need to use a cane anyway.

If you’re looking to learn more about how to fight with a cane, may I recommend Sammy Franco’s book on the subject. 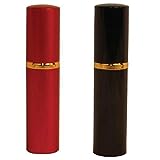 Women throughout America regularly carry pepper spray on their person as they go about their daily business. However, one may not always be able to reach for a can of pepper spray without first alerting an attacker of doing so. Alternatively, maybe you don’t want people to know you’re carrying pepper spray.

That’s where this comes in.

This vial of pepper spray looks like any other generic tube of lipstick out there. As such, one should be able to bring it up to eye level and use it before an attacker gets the first notion of what is coming. 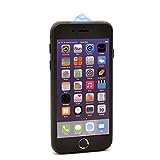 This ingeniously disguised stun gun looks just like your iPhone. This means you can carry a weapon in your hands as you’re walking down a dark sidewalk without feeling as if you’re broadcasting to the whole world that you’re on alert (though there are advantages to looking like you’re on alert).

While there are stronger stun guns out there voltage-wise, this model should serve as inspiration to other manufacturers who will create a more potent option.

Cold Steel has a reputation for creating indestructible self-defense tools, and the koga is no exception to this. This unassuming self-defense too will easily fit in a front pocket with little imprint and will give you a weapon that will not only help to bolster your punches, but permit you to strike with the tips and engage in various joint locks and pressure points as well.

It will take a bit of practice and know-how to make the most use of a koga, but beware the person engage in a fight who knows how to use one!

Another weapon that will appeal mainly to the ladies. Here we have a spike dagger hidden inside the guts of a hairbrush. Knives are already great weapons for extreme close quarters combat, and this is a means to always have such at the ready within your bathroom.

I like this one because it can also be used for day-to-day tasks. If you’re going to take up purse space, as an example, with a hidden weapon, why not make it a weapon that can be used for other purposes. Unfortunately, these aren’t easy to find. You’ll have to do some serious digging to locate one.

I’m a big fan of neck knives, and Cold Steel makes some of the best. Their Urban Pal full serrated knife is about as discrete of a knife as you can get. They’re push knives, meaning you grasp them in your fist much in the same way someone would use metal knuckles, and can help you to up the ante quite a bit.

This particularly knife, and many other options like it, is available for a reasonable price at Knife Country USA.

Should you not want to wear it around your neck, they can easily fit into a pocket as well – even if you’re wearing gym shorts – without anybody ever knowing you have a knife on your person.

A flashlight is likely part of your EDC anyway, so why not make it one that doubles as a weapon as well? Tactical flashlights can be used as weapons in one of two ways:

Olight specializes in high-end, yet reasonably priced tactical lights, so they are an option. We’ve reviewed many of their lights here on SHTF Blog – take a look.

Note: If you’re shopping at Olight, use coupon code
“PREPPERPRESS”
for an additional 10% off non-sale items.

The bonus here is that tactical lights can serve not only as weapons themselves but they can also be directly attached to weapons, i.e. firearms.

Some tactical flashlights are geared more directly toward self-defense than others, so if that’s your primary goal, look for a light with an edge that has serious teeth. That’ll leave a very tell-tale mark on the face of your opponent. 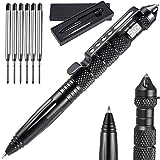 Looking for something discrete that has more than one purpose (aka, it can write), then check out a tactical pen. Some of these things are absolute brutes, complete with glass breakers, pointed tips, and the like. If you get hit by one of these you won’t forget it!

A great number of discrete self-defense tools are striking weapons. Tactical pens, tactical flashlights, you name it. If you’re looking for something that has a bit more of a sinister feel to it, check out these keychain spikes.

With the finger grooves, they’ll easily nest in your hand and give you a large metal spike you can use to strike at your opponent with. While they’re most certainly noticeable if you pull out your keys, it can easily fit into a pocket unnoticed until it’s needed.

If you’re going out for a run, don’t like carrying things in your hands, yet want some means to defend yourself, why not strap a spiked disc onto your hat? Unless somebody manages to see the back of your head, nobody will ever know this is there, particularly if your hat is black as well. That’s the perfect location for something thinking they’ll sucker punch you from behind.

These can be also attached to your wristwatch or your shoestrings. On your watch, it can deliver a nasty scrape across someone’s face. On your shoe laces, it can put a bit more “kick” into your kick.

If you’ll be walking about in rainy environments, a self-defense umbrella is about as discrete of a weapon as you can get, right up there with the cane. With a virtually unbreakable center pole, a heavy knob handle, and a steel tip, you can dole out some serious damage to the assailant who views you as simply another unarmed potential victim.

The alternative to this umbrella, and more lethal, is the umbrella that hides a sword in the handle. These are increasingly hard to find, however.

A hidden weapon will give you the element of surprise against an attacker. It will allow you to carry a self-defense tool without others knowing. Further, they could give you an increased sense of confidence and security.

Do you carry any of the above? Have you ever needed to use them? What are your thoughts on some other discrete weapons? Let us know in the comments!

Can Humans Eat Grass? What Happens if You Do?

Has any one actually tested any of this stuff?
Lipstick stun guns!

Cold Steel made the hairbrush dagger, called the honeycomb. It’s an excellent concealed dagger, well made, I have one in a drawer in each bathroom. It’s not hard to find online, a quick Google search found it in stock for $7. I am not a CS employee, just a customer.

When I was a serving police officer, one of our favorite bits of kit, were our 3 or 4 D cell torches!