Kansas Preppers – What You Need to Know

This article will focus on Kansas from a prepper’s perspective. What specific challenges does the state face from a historical perspective? What are the threats given the state’s geography? Where should Kansans prioritize their preps?

NOTE: Do you live in Kansas? You know your state, so let us know in the comments section how this article can be improved. What did we miss? What did we get right?

Life On the Prairie

In the middle of the midwestern United States lies the great state of Kansas. True to its square shape, it borders four very different states:

The population density in Kansas is fairly low. While it is the 15th most extensive state, it is only the 35th most populous. This leads Kansas to be flat, lonely state that is conducive to the peace, serenity, and safety most preppers crave. Though there are not that many people in the state, it has managed to earn several nick names. “Bleeding Kansas,” “Jayhawks State,” “Sunflower State,” and “Wheat State” just to name a few.

However, don’t be fooled by Kansas. Kansas is a highly productive state that manufactures some of the most complex machines in the world. The state’s biggest city, Wichita, is called “Air Capital of the World”. This is due to it being home to several aircraft companies. Aviation is one of the state’s top five industries employing over 24,000 people.

Good news for preppers – food is not scarce in Kansas! The state is 1st in the US for wheat production and 3rd in the country for cattle production and beef processing. While this is fantastic for large agricultural farms, it is also good for the prepper. It demonstrates the vitality of Kansas as a place to grow your own food.

A homestead could do very well in this state with a little effort and planning. Its plains and fertile soil is perfect for both animal husbandry and growing row crops. If you find yourself as a prepper in Kansas, consider building a small farm to take advantage of this.

Historically, the American Great Plains were a true bread basket for native populations. While today it is largely farmland, there is still an ample amount of wildlife to be harvested. Kansas is routinely producing record book whitetail deer, antelope, and is a historic home to free ranging buffalo and elk. While today many of the large species aren’t as available as they once were, there are still populations that are easily harvested by a hungry hunter.

One thing that comes with massive agricultural efforts is rampant consumption of water. For centuries, Kansans enjoyed plenty of water and the Ogallala Aquifer could easily be tapped for wells. However, with the need for more food as the American population has swollen, the Ogallala Aquifer is suffering from unsustainable pressure.

Efforts to curtail the water use is inherently divisive. In order to prevent life ending drought, the residents of the state are facing difficult decisions in the coming years. For the Kansas prepper, this means that water efficiency is key for long term sustainability.

Unrest on the Horizon?

It’s a tale as old as the American West, water wars. As urban populations grow so does their demand for water. In Kansas, many cities have been encroaching on the water that farmers and ranchers need to keep their operations viable. As these tensions rise, so will the tensions between the people of Kansas despite its low population. This is likely to erupt into legal battles and land devaluation in the future. Preppers in Kansas should be aware of this social and political dynamic as water disputes could easily come home to roost in a number of ways.

The weather is probably the most like SHTF scenario in Kansas. If you live in Kansas it is not a matter of if you will get caught in a tornado, but when. Knowing this, every precaution should be taken to keep yourself, your prepper supplies, and your way of life safe from the inevitable twister that blows past your house.

The Prepper's Survival Bible: 10 in 1: Life-Saving Strategies To Live After The Collapse Of The World. Including Stockpiling, Self Defense, Medical Emergencies, And More. Your Ultimate Survival Guide.
Buy on Amazon

Dorothy wasn’t the only one having problem with tornadoes. Kansas seems to be full of them.

While many people live through them every year, in a SHTF scenario medical aid, food, water, and law enforcement will cease to become certainties. You should build your home in such a way that it can “weather” the most violent of storms and still be able to sustain you during the darkest of times. If that is not an option, consider expedient fallout shelter designs that can easily double for tornado protection.

The state experiences on average 50 major thunderstorms per year. It isn’t surprising that Kansas is ranked 3rd in the US for lighting flashes and 5th for cloud-to-ground lightning. In addition, other strange weather patterns can make it so that Kansas folk experience flooding, crop damage, and hail-related property damage.

Being in the heart of Tornado Alley with tornado averages between 88 and 96 each year, Kansas is very well known for its storms. However, it also has other, less severe, natural disasters such as wildfires, landslides, earthquakes, severe droughts, and power outages. One worth mentioning is the winter storms Kansas suffers from. They produce snowfall that varies wildly from location to location dropping anywhere from 11 inches to 40 inches of snow.

Sometimes it’s helpful to look at the past in order to predict the future, and this is particularly helpful if you’re prepping in Kansas for natural disasters. Following are some of the most notable disasters that have struck the state.

1) 1935 Dust Bowl Disaster – You can’t talk about Kansas and disasters without mentioning the Dust Bowl. It is iconic and was used as a template for the premise of the movie Interstellar. It turns out, if you don’t regularly rotate your crops, all you do is create a dusty nightmare. This one virtually destroyed the agricultural economy of Kansas with a deadly onslaught of dust storms that blotted out the sun for days.

3) The Udall Tornado – In 1955, Kansas lived up to its reputation as the home of many severe tornados. A series of these destructive twisters hit that year, but the worst tornado in Kansas history landed in Udall. An F5, this 1300-yard-wide twister killed 20% of the Udall population. That’s right, one fifth of an entire community was laid to rest in the wake of this storm.

4) Wichita Hailstorm – In 1992 a freakishly destructive hailstorm descended on Wichita. Within the span of six hours, two separate thunderstorms pelted Kansas with hail roughly 4.5” in diameter. Imagine chunks of ice the size of large ripe oranges falling from the sky at near terminal velocity. The result was one of the worst hailstorms in US history. In its wake was $100 million in crop damage. Virtually 100% of the wheat was destroyed and $500 million in property damage took place.

5) The Great Flood of 1993 – In 1991, Mount Pinatubo, a volcano in the Philippines erupted and caused a volcanic winter to set in during the proceeding years. The result were record rainfalls that flooded many parts of the world, but namely Kansas. Thanks to implementations of lessons learned from the flood of 1951, much damage was avoided. However, after the 100 days of flooding were over there were $15 billion in property damage and 32 people lost their lives.

Kansas offers a lot to the would be farmer. Investing the time and effort in learning how to build a highly effective and efficient farm is well worth the time for a prepper that wants to stand their ground during a SHTF scenario. Luckily, with only a small amount of planning and effort, even an acre of Kansas can be transformed into a productive single family farm. It is all in how you use the land.

Kansas is prone to drought, heat, and is on the edge of a major water crisis. Therefore, it is important to make the most out of every drop of water that you have. Investing in drip irrigation systems that deposit water directly on the base of your crops instead of broadcast irrigation will do precisely that. 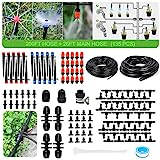 When you use broadcast irrigation you commit majority of the water to evaporation before it ever gets to the plant. Using a direct line and drip emitters will greatly reduce your water needs.

While everyone knows that you should have at least a 90-day supply to live off of if something happens, not everyone knows it should below ground. The reason in Kansas is simple, tornados. In the event an F5 or a series of tornados levels your house, having your supplies in a below ground tornado shelter will be a game changer in terms of living in the aftermath. Build or purchase a tornado shelter that is big enough to house your 90-day supply as well as you and your family and shop smart by watching for bulk survival food deals that have a long shelf life.

One of the most important pieces of equipment for any prepper planning to bug out is to have decent maps of their state. Having an identified bug out location is crucial. All preppers in any state should begin their bug out plans with a paper map of their state. Nothing is better for all-purpose use than the DeLorme Atlas and Gazetteer. 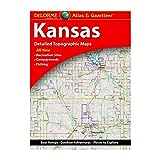 If you have decided to set out for safety in Kansas then the good news is there is plenty of wild game for the table. With the abundance of row crops, the wildlife population is fat and healthy. However, given the terrain your stalking skills will need to be exceptional to get close to them.

Therefore, having something that is powerful enough to put down large game and being in proficient in its use is vital. Consider buying a .308 and making time to practice with it regularly so when the day comes you are ready.

Depending on the time of year you bug out, water could very well be in short supply. While there are lakes and rivers in Kansas, it may be some time before you get to them. Therefore, have at least a weeks water supply onboard your bugout vehicle at all times. This will ensure that when you have to leave, you can make it to the next water point without having to worry about dehydration.

Ruck Your Feet Off

During a SHTF scenario, the roads, if passable, will be dangerous places. Therefore, you may elect to simply walk to your bug out location. Given the long distances that Kansas can afford a prepper, this may be quite some walk. It is essential that you stay in shape. More specifically, the kind of shape that is conducive to walking long distances for days on end with weight on your back. Invest in a good ruck and start practicing with 50lbs on your back. This is the sweet spot to maximize training and minimizing injury.

This article just scratches the surface of what Kansas preppers need to know. The following links could held educate you more on prepping in the state.

Kansas Permaculture Institute – Offers classes on building, living on, and thriving off small farms in Kansas