Home Shooting Should You Wear a Shoulder Holster?
Shooting

Should You Wear a Shoulder Holster?

The debate over best holsters doesn’t get as heated AR vs AK or .223 vs .308, but the “best” holster choice is a topic that shooters should consider. Holster choice often depends on both the handgun and the shooter, but some shooters might wonder – Should I buy a shoulder holster?

The answer: It depends. Shoulder holsters have a role, but they also raise safety concerns that shooters must know.

While reviewing an outside-the-waistband (OWB) holster, I had a chance to get some feedback from a friend who was carrying the same pistol, a small S&W .380 Bodyguard. These guns represent the genre of carry guns so tiny that some are carried without a holster of any kind.

That was the method employed by my buddy, whose pistol was simply stashed in a coat pocket. I’ve done the same thing, but I’ve never been big on it due to concerns over foreign objects in a trigger guard, as well as all-important muzzle control. Because the majority of today’s popular handguns are another step larger, they’re much more likely to be carried in a holster, typically an OWB or inside-the-waistband (IWB) design.

Still, muzzle orientation can be a concern with appendix carried locations. Shoulder holsters often present similar indexing issues (more on this shortly), a topic we wound up discussing, prompted by the day’s cold weather.

At the time, we were in winter coats, which create hassles for access of anything on a belt. Strictly as a matter of scale, although doable, the little S&W seems too small to qualify as a shoulder rig.

What about larger handguns? Moving a step beyond today’s EDC pistols (Sig’s P365, S&W’s Shields, etc.), clothing issues aside, a fully loaded hi-cap version (Glock 17, S&W M&P) could be a bit much to wear without a properly balanced belt (done that, been there, on a daily basis).

Gotta figure the system should include at least one spare magazine. Those in uniform will carry at least two – more weight at the midline, not counting more gear.

Then there’s the series of large-frame revolvers, such as a Ruger .44 Magnum Redhawk, or S&W Model 629 N-frames. A 4-inch M-629 Mountain Gun is light enough to be manageable on a belt, but a standard 6-inch version is a bit much. How about semiautos? Speaking from experience, a 6-inch 1911s (to include the latest 10mm long-slide versions) is in the same league.

A belt holster can work, but a 4” Commander will seem a whole lot more attractive in short order. Wouldn’t it be more comfortable to distribute the load across both shoulders?

Concealment aside, at some point a shoulder holster begins to make sense.

However, because he was familiar with my background, my friend also suspected I wasn’t a big fan of these systems – a correct assumption, predicated on safety.

Holster skills are a cornerstone of any defensive handgun course, and these programs often involve a full firing line of shooters. The overall safety of the group is thus contingent on holster designs that support strict downrange muzzle management.

Viewed from the perspective of range operations, Instructor Me has reservations about any sort of cross-draw system, whether belt or shoulder mounted. And, apparently, I’m not alone.

It comes as no surprise that the Gunsite Academy spells out specific holster requirements for attendance of their highly regarded five-day 250 Pistol Class.

Gunsite stipulates a rigid Kydex or leather outside the waistband (OWB) holster with a covered trigger guard (prohibited versions include SERPA types and inside the waistband (IWB) designs). Not too coincidentally, these requirements reflect the criteria we (my agency’s firearms training unit) employed to narrow down prospective holster candidates. I’ve distilled ours to those more relevant to shoulder holster systems.

Some IWB carry methods are sketchy regarding Rule Two: Don’t point the firearm at something you’re unwilling to destroy!

Horizontal shoulder holsters are almost guaranteed to violate this basic tenet by jeopardizing others in close proximity (see photo). But the “something” could as easily be part of your own anatomy (a reason Gunsite excludes IWD designs).

Even using a properly broken-in vertical rig, it’s all-too-easy to sweep body parts during a draw or the recovery process. Adjacent shooters could as easily be swept without total focus on the process. We (the FTU) managed single participants through assignment to outboard line-slots (left end for a righty) – a necessity eventually eliminated through a list of approved holsters.

Not that a shoulder holster won’t work. Actually, it could be just the ticket for individual users – with proper precautions.

Designs that require the use of both hands introduce safety concerns because, sooner or later, the support hand is almost guaranteed to wind up in front of the muzzle. From there this move devolves to an unsafe habit, and the extra fiddling is a distraction from situational awareness.

But given the usefulness of shoulder holster for some circumstances, it’s a trade-off. Good chance both hands will come into play if for no other reason than clothing. The remedy is an accommodating system, tempered with a cautious muzzle management, especially during recovery to the holster.

Fortunately, this feature is fairly common among shoulder holsters – a good thing given the popularity of today’s striker-fired pistols sans active safeties. Most have trigger pulls around 50% lighter than double-action revolvers, but with either, a shielded trigger provides some insurance against insertion of the trigger finger – and also the introduction of loose clothing!

In theory, pay attention and you should be all set. But maneuvers related to re-holstering and clothing can create distractions – especially with unfamiliar systems. And gun-fit is part of this equation…

For most civilians, retention is a matter of fit and concealment, but gun loss is still a concern. Most shoulder holsters do incorporate some type of retention feature (whether a thumb-break or strap), but a snug fit also helps – within reason. Too tight leads to struggles with possible loss of muzzle control, and some new leather holsters can start out really tight! Best to try an unloaded gun in the holster before attempting to don the system.

The Falco shoulder holster shown here is a masterpiece of leather-holster art, but it intentionally starts out tight to ensure proper long-term fit. The remedy for this one was a break-in period of several days, involving multiple gun-insertions with overnight holstering.

Another example, my circa-1990s S&W Model 3913, was reasonably secure in its horizontal leather Galco Miami Classic rig. Although probably unnecessary, I swapped the pistol’s bobbed hammer for a spurred version. This improved purchase of the holster’s retention strap for greater peace of mind during “dynamic” situations.

But a vertical should holster system is the pathway to the greatest security, and some incorporate belt connections for increased stability. Recovery can be easier, and “floppage” is reduced, a benefit during strenuous circumstances. Still, the dangling reloads common to some designs represent possible “loose” ends.

As noted above, heavy loads carry much better when distributed, especially as minutes turn into hours. But to a large extent, comfort relates to use. And use could involve anything from hours spent in a vehicle to arduous outdoor treks, possibly with some climbing thrown in.

A range session can be revealing but it may not tell the whole story. Factoring in defense, consider the effects of movement during a run.

It’s been a while since I wore a shoulder holster, but they do have mission-specific advantages.

The last time was during a multi-day high-security operation during a brutal winter cold spell. Respites to the warmth of a vehicle were briefer than expected, so the priority shifted to endurance. Salvation came from a well-used shoulder rig underneath a heavy parka, leaving a few inches unzipped for access of the pistol (the backup to an AR-15).

Once back inside the vehicle, access was greatly improved. Even a thigh-rig would’ve been a hassle with the long parka – something many outdoor folks will relate to. Extreme conditions call for extreme measures. For what it’s worth, I could’ve easily concealed a humongous S&W 500 revolver inside my Nanook of The North coat.

Speaking of “big” handguns, seems as though long-slide 10mms are making inroads on revolvers. But large-frame wheel-guns are still great picks for travel in remote country where threats could be four-legged. Here, accessibility and carry comfort are bigger concerns than concealment (although protection from the elements is a plus). Over the years I’ve used vertical leather Bianchi X-15 shoulder holsters to tote Ruger Super Blackhawks, S&W M-629s, and several other large revolvers. 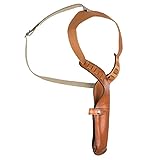 These were handgun hunts, usually involving carry outside a coat. But the same systems worked as well underneath foul weather gear, without worries over fogged scopes or frozen actions. In this regard, a properly designed (non-collapsible) synthetic version can be better. It’ll resist shrinkage and be much easier to dry.

Accommodating Optics and Other Accessories

Small red-dot sights are increasingly popular and some, but not all, shoulder holsters can accommodate handguns so equipped, and scopes are more problematic. The latter are typically mounted to large handguns, too.

The solution for me became a sling, which I’ve used successfully on a number of large-frame revolvers, T/C Contender pistols, and a few other handguns. My systems consist of a basic extra-long nylon version rigged with QD swivels. It can take some doing, but there’s often a way to fit the handgun with matching QD studs.

The resulting system carries well, provides increased aiming stability, and will even tuck inside a coat. The downside, due to the way the gun wants to hang, is horizontal muzzle orientation, a concern if others are present.

Which leads to chest-holster systems. They’re popular in wild places for good reasons. The handgun is right there if needed but security isn’t sacrificed. I may own one yet for use with heavy insulated coveralls. Could be just the ticket for the track-equipped ATV – a vastly different role than a small handgun tucked underneath a suit jacket.

Skills are reinforced through repetition, good or bad. My muscle memory is ingrained through years of belt-carried “systems” that include spare ammunition. In all honesty, I lack the requisite experience to ensure true shoulder holster competency, at least from a defensive viewpoint. A dropped reload on the range is extra exercise. During a fight, it’s a fiasco – even without darkness factored in.

The solution, of course, is relevant practice on a suitable system. For new handgunners, Gunsite’s standards are the safer starting point. Shoulder rigs are the better 2.0 version. Even at that, if possible, try before you buy, preferably with an unloaded (or inert training gun) in front of a mirror – with a jaundiced eye toward safe muzzle management. Also, assuming concealment is factored in, you may need to invest in some larger clothing (or start counting calories).

Lastly, as is true of any firearm system, gun-handling is of paramount concern. Stay safe!

Want to read more from Steve Markwith? Consider his book Handguns: A Buyer’s and Shooter’s Guide.

How to Refinish a Gun Stock in 9 Steps