Got solar panels? I don’t – not on the house anyway. But I have had manufacturers send me small, portable panels from time to time. That’s what happened here. SunJack sent me their 25W Portable Solar Charger + 2 Powerbanks package to review.

SunJack solar panels create the ability to generate electrical power on the go. That ability, to charge critical gear when batteries run out, is a goal of many preppers. Whether you are bugging out, living at a remote location, or facing an extended blackout, being able to charge various items is critical to safety, security, and comfort. Solar panels of this type are also often seen spread out across boats.

From the Prepper Press Instagram account, I often see pictures associated with the vanlife hashtag (#vanlife). Often it’s young people traveling the world, pictured it mountains, beach, or forest settings, looking out their van at the view.

That kind of lifestyle requires van modifications, and it’s not uncommon to have solar panels involved. Granted, you can charge a USB device from your van, but portable panels give you mobility. So when you bug out to a National Park in your “vanlife van,” you can set up camp or go into the back country without being tethered to the vehicle.

The entire unit packs small. (See the Prepper Press squirrel patch for reference.) Folded, the SunJack is 12.5″ x 8″ x 1.2″. It weights 3.3 lbs (batteries included). This makes it a bit big and heavy for a bug out bag, but perfect to store in the trunk of a vehicle.

It may not look like it in the picture, but the panels are very strong. They feel like textured plastic. They are weather-resistant and you won’t have to use caution when moving these around. They also stand up to different temperature extremes.

The batteries, charging port, and charging cables are stored inside a zippered pouch on the back of the panels (above pic).

Each battery has an input port (from the panels), and then three different USB charging ports. The panel can charge both of the battery banks at once. Those battery banks can then be used to charge devices when the sun is down.

The solar kit comes with two SunJack Qualcomm 3.0 battery packs, two fast-charge cables, and two small carabiners to help you hang the panels or fasten them down (add your own Paracord).

How Does the SunJack Work?

Harold Tan, the founder and CEO of SunJack, was interviewed as part of a Nation Swell article. SunJack began its life as a Kickstarter campaign where it reached its goal of $33,000. The article explains in simple turns how the SunJack functions:

The charger runs on monocrystalline solar cells — the same type of solar cells that go on rooftops. As Tan says, what’s different about his product is how its proprietary USB port and lithium-polymer battery optimizes the power of sunlight. (It’s like getting “more water out of your faucet faster.”) The charger is extremely powerful for its size (it can be folded up and toted around like an iPad), plus it’s virtually indestructible, as demonstrated by a car that runs over it.

I put the panels in my pack and took them out cross country skiing. Off to the side of a small clearing I set them on a large rock facing the sun. I propped them up with another, smaller rock, and plugged the battery bank and my cellphone into the back of the panels.

The temperatures were not brutal, but it was a bit windy. I wondered if the colder air temperature would impact the battery bank and the battery of the phone itself. My phone was definitely charging – and at what seemed like reasonable speed.

It may not be the most practical for backcountry skiing, but the SunJack 25W solar charger laid out on the roof or hood of a vehicle, set out for a day at the beach, or strapped across a boat, would be the ideal way to comfortably – and passively – charge portable devices.

The SunJack 25W Portable Solar Charger +2 Powerbanks, like what I have, is not terribly priced. 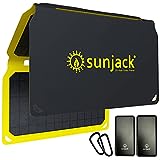 The smaller 15W Solar Charger costs about half as much. You won’t have the same power or battery banks, but you will have USB ports to charge your phone, tablet, etc. You could add battery banks you already own so you have charging power after the sun goes down. 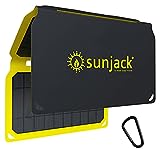 The panels are ideal for outdoor adventuring and they could be an essential part of an emergency survival kit. They are well-constructed and seem to have a strong performance.

Theprice tag will give many people pause, however; and I can understand that. For that reason, I would not recommend SunJack panels for “just in case” purposes. However – for the person who can put them to periodic use, it is a very good product that will leave you pleased.