Yaesu VX-6R Review: Worth the Money?

I am writing this Yaesu VX-6R review because I am seriously impressed. I’m telling you that straight from the outset. This could be the most versatile handheld (HT) ham radio on the market. The VX-6R offers:

In a typical review I would go highlighting the pros and cons, but – at the risk of sounding like one big sales pitch – I found very few cons with this radio. The one con is its price.

It’s not a cheap handheld radio by any means, but in this case, you get what you pay for. So, in answer to the question is the Yaesu VX-6R worth the money? Yes!

Why do I say all of this? Well, let’s take a look.

To start with, the Yaesu VX-6R could virtually classify as a wideband receiver. It can pick up frequencies across a great span of the spectrum, meaning you can listen in on more than would ever be possible with a lot of the other HTs out there on the market. It goes well beyond just the emergency radio frequencies I wrote about before.

Here are the bands that you can access with the Yaesu VX-6R: 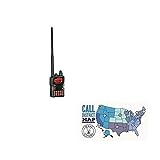 Most new hams operate in 2m and 70cm. This is because that’s what the Technician license within the US lets you operate on. Knowing this, virtually all HTs out there are built for 2m and 70cm – being referred to as dual-band radios as a result.

But the VX-6R takes things a step further. It gives you the ability to transmit on a third band – 222MHz. This not only allows you to listen in on more of what’s going on out there, but it also means that you have something of a degree of privacy with your communications.

The reason for this is simply due to traffic. Not a lot of people out there have the means to listen in on the 222MHz band. Their radios won’t handle it. As such, you can communicate to your intended recipient without their being as many ears tuning in. While this most certainly doesn’t mean your messages are secure, it is a step in the right direction.

It’s important to point out here though that the VX-6R doesn’t have full access to the 222MHz band. It can only operate on a slice of it. Enough of a slice to matter, in my opinion, but not enough to be marketed as tri-band.

Perhaps one of the most convenient features of the Yaesu VX-6R are the large banks of pre-programmed frequencies that it come with. If you’re hesitant to get into ham radio because you’ve heard (or witnessed) how difficult it often is to program the radio to work within your region, this is a huge sigh of relief.

Let’s take a look at what comes already programmed in:

All in all, this means that right out of the box I was set up to listen in on a wide array of frequencies without ever having to program anything. That’s fantastic.

Do you have a lot of frequencies that you want to store in your radio for easy access? No problem. The Yaesu VX-6R has 900 standard memory channels. While you’ll likely never fill up the entire memory bank, that’s the point. You virtually never have to worry about not being able to add more channels to your radio.

So, if you’re somebody who lives in Nashville, Tennessee, but has a son going to college in Boulder, Colorado, you can now program in repeaters, police channels, and EMS frequencies all the way from where you’re apt to where you may have to be in https://www.shtfblog.com/what-is-teotwawki-a-complete-explanation/TEOTWAWKI situation. You would have access to intel along the entire route!

Speaking of programming, you likely have a wide array of frequencies that you do want to program your radio for. Perhaps you have many local repeaters you want to program in. You really want to listen in on police, fire, and EMS frequencies in your area as well, so you’d like to program them in too. And of course, a “bubba detector” would be nice as well, so you could listen in on anybody transmitting with FRS or GMRS.

The VX-6R will easily allow you to program all of those frequencies into your radio in about the most user-friendly and organized manner that I’ve ever seen. This occurs via “channel banks”. These allow you to set certain frequencies in certain ‘boxes’ if you will. So ‘Bank 1’ can be all your local repeaters, ‘Bank 2’ can be repeaters a few counties over, ‘Bank 3’ can be your police scanner, ‘Bank 4’ your bubba detector, and so on.

This makes for a very organized and ‘clean’ means of keeping all your frequencies together. You can easily change banks to scan through what you’re specifically looking for without having a jumble of memorized channels that you’re unsure of whether or not you can legally transmit on them or not.

Just scanning through a band, it does a very respectable job as well, helping you to tune in on where all the chatter is at on the radio spectrum as quickly as possible.

While I still like the UV-5R (I know, I know, save your tomatoes for someone else), nobody will question me when I say it’s not robust. In fact, most budget HTs aren’t.

In a post-disaster environment this could very quickly prove to be a problem. While you’re a mile out checking the cattle fencing and see potential attackers isn’t the time to drop your radio and have it break. You want something that can handle being jostled and still work.

You want something that can handle being out with you in the rain and still work. The Yaesu VX-6R is rated as IPX7, meaning it can be submersed up to 3’ for 30 minutes before equipment failure. It also has a good shock rating. That is what you want if you’re looking for rugged post-disaster usability in an HT.

If that SMA male stick breaks in a radio where it’s integral to the radio, you’re screwed. Now you have to find somebody who knows how to fix the dang thing if you want your radio to work again, and good luck finding that in a post-disaster world.

While most certainly pricier than a Baofeng UV-5R (the UV-5R is also a good choice), I believe if you’re getting deeper into the world of ham radio and are looking for an HT with more features, more ease of use, and that is going to have the toughness needed to survive long-term in a disaster situation, the Yaesu VX-6R is what you’re looking for.

In addition to buying the radio, I highly recommend that you go ahead and purchase the appropriate programming cable and software as well. This makes rapid and accurate input of the data that you want programmed possible, and without it you’re going to spend an exponential more amount of time trying to get the radio to do what you want it to do. 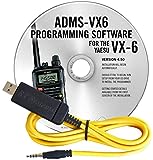 There are most certainly other fantastic features within the Yaesu VX-6R as well that I didn’t get to cover here. Automatic Range Transponder System, the Emergency Automatic ID feature, and a CW training feature are just a few of these other great features.

So if you’re looking for an HT that will give you a lot of bang for your buck, I recommend you check out the Yaesu VX-6R. I think you’ll really enjoy it. And don’t forget the ARRL license manual!

What are your thoughts? Have you used a VX-6R in the past? Are you looking at getting one in the near future? Let us know in the comments below!

10 Women in Bushcraft and Wilderness Survival

I have owned three VX6r units, and will soon buy my fourth. They have all failed because of a charging
wire internal to the radio. This should be fixed or warned about by Yaesu, but I know now how to avoid
it. I made a habit of keeping a charging wire attached to the radio and leaving it scanning 24/7. It
apparently can’t do that for more than about three years. Kenwood had some HTs with the same
problem, particularly the ones with six meters. Anyway, get a spare battery or two and change them
rather than leaving a power supply wire hooked up continuously. It is a super radio and the CW
learning feature is great when you have to wait on somebody. The power on 226 MHz is only 1.5 watts,
however most repeaters are located in urban areas so if you are in the city, it works well. Don’t overlook
the comments about privacy. If you and a friend can simplex on 226, very little chance someone else
will hear you. AC9DN